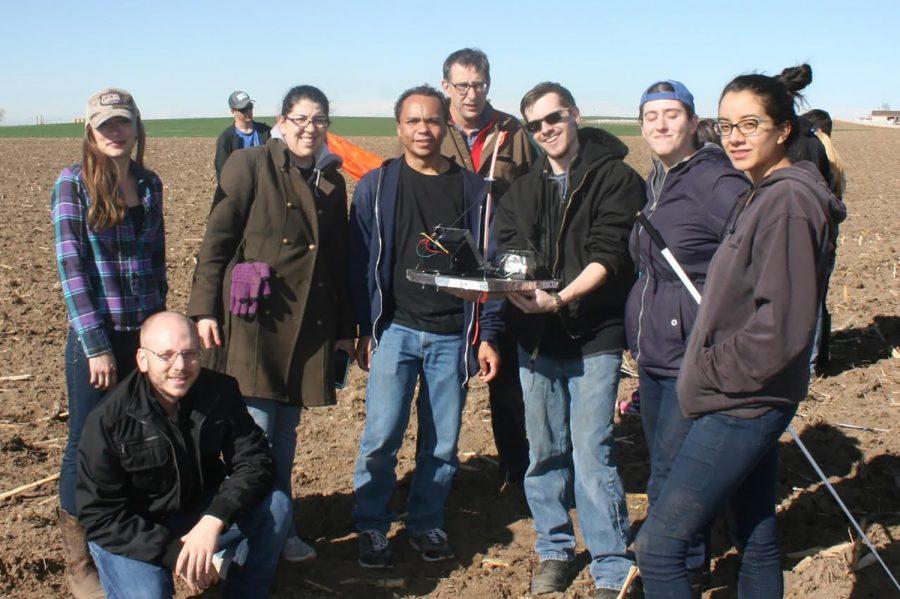 It is that time of year again, and the intrepid ACC DemoSat team was on the loose running through cornfields in pursuit of their payload that dropped to earth east of Eaton, Colorado on April 9, 2016. Eighty-two minutes earlier, at 6:07 a.m., the 6-member team had watched as their Edge of Space Sciences (EOSS) balloon ascended through spotty clouds and rose high above Eaton Middle School.  Losing sight of it at times, the team was confident it was still aloft because the (EOSS) group equips each balloon with a tracking system that relays its exact location at all times.

Not surprisingly, the FAA, notified by EOSS, is also aware of the balloon’s flight plan and location in order to divert planes during the balloon’s flight. Rising to as much as 3 times the cruising altitude of an airplane (39,000 ft.), the payload is wrapped in reflective aluminum tape to alert airplanes to its presence.

However, as Wesley Perkins, a member of the DemoSat team, said, “If the plane gets a visual, it is a little too late.”

The Colorado Space Grant Consortium (COSGC), funded by NASA, sponsors the DemoSat teams at colleges around Colorado, and it is with COSGC support that ACC students were able to build the payload for the EOSS hydrogen balloon.

ACC belongs to EOSS, a non-profit organization staffed by volunteers who assist students with their payloads and facilitate the launch of the high-altitude balloons.

The ACC DemoSat team, as part of the (COSGC), created a payload to be carried on the (EOSS) high altitude hydrogen balloon that also carried payloads from 8 area schools.  Ascending for 82 minutes, it reached an altitude of 81,000 feet before it burst, falling to the ground in a cornfield 8 miles east of Eaton.

As the air pressure outside the balloon decreased, the inside pressure increased causing the hydrogen to expand and with no outlet for the gas; the balloon burst. The payload fell to the ground, and the recovery efforts began with first determining the landing site, followed by identifying and notifying  the cornfield’s owner to gain permission for retrieval of the payload. 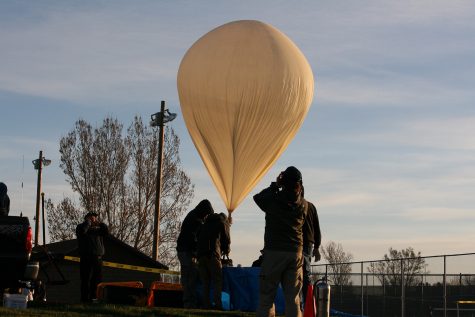 EOSS fills ACC DemoSat team balloon with hydrogen before the launch in Eaton,Colorado on April 9, 2016.

EOSS monitors the weather and weather patterns before the launch, but they are never able to determine exactly where the payload will land to gain advance approval for access to the landing site.

During the Spring semester, the team worked on the payload guided by moderators, Astronomy faculty member Jennifer Jones, and Physics faculty member Henry Weigel. The moderators were available to advise and offer assistance when necessary, but the students designed and built the payload.

Launching of the balloon with their payload attached, was the culmination of endless hours of work by this year’s DemoSat team. They labored to design a payload that would test for the presence and amount of certain gases at different altitudes to measure the concentration of oxygen, hydrogen, and other noble gases in the atmosphere. The data should reveal the state of the ozone layer over Colorado.

Perkins said, “NASA has data, but the team will compare their data to NASA’s to see if there have been any significant changes in the ozone layer over Colorado.”

Perkins explained that the team used a spectrometer that records the colors of the rainbow and where black bands appear in the spectrum it confirms oversaturation of certain key particles. This information allows the team to measure the concentration of target particles to determine if those concentrations have changed.

The data is not yet back from EOSS and so, the results are not available at this time.

The balloons typically reach between 95,000 feet and 100,000 ft., which is above 99% of the Earth’s atmospheric mass. This altitude is not readily accessible for ground-based aircraft and only available to rockets for a short amount of time. Thus, gas balloons are the most efficient vessels to use for exploration at these heights, often called the edge of space.