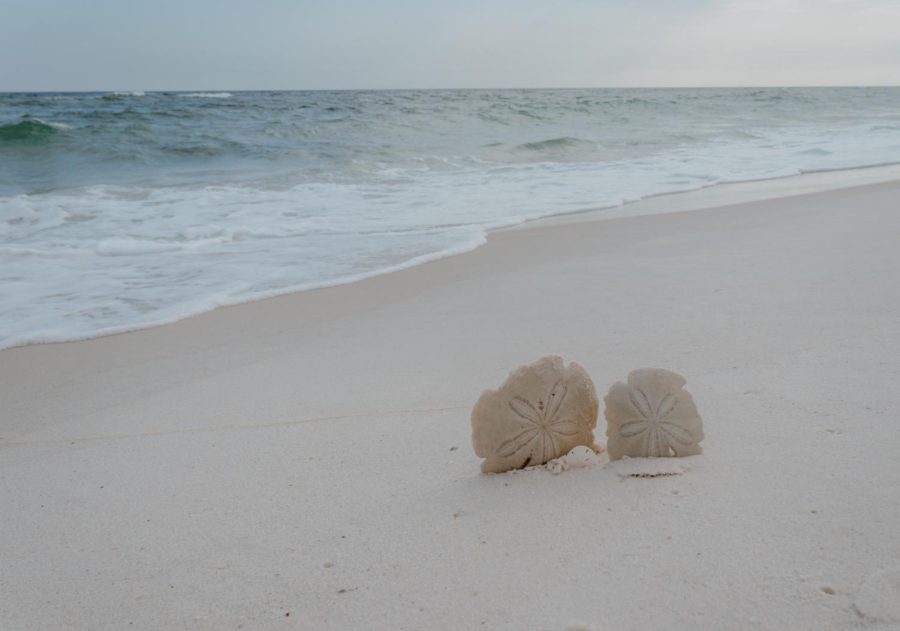 Image by Briana Tozour via Unsplash

Have you ever found an absolutely undamaged sand dollar on the beach or held one in your hands? Lots of people look for them, but I find it’s a treasure when you discover one still intact. I remember years ago, visiting Daytona, Florida, and being handed my first box of tiny sand dollars from two long-time family friends. Taking one of the sand dollars from the box and placing the white, flat, disk-shaped body in the palm of my hand felt rough against my skin. When looking at my collection, I couldn’t be more proud of the little box filled with sand dollars. These magnificent creatures have an emotional and spiritual connotation in addition to being an intriguing part of nature, leaving their special footprints in the sand.

According to the Encyclopedia of Animals 2017, sand dollars are burrowing sea urchins that are “found buried in the sand and mud below the low tide mark along sandy shores and tidal flats.” When they wash up on the beach and are bleached by the sun, they resemble gigantic silver coins. While Dendraster is known as the common local species, some are known to stand out and become purple and appear similar to flower petals. This design mirrors the internal structure of the typical sand dollar and is called a petaloid.

As I spoke to Johnathon Browning, Special Needs Educator of the Monterey Bay Aquarium on the phone, I had several questions for him. I was most intrigued by why the Aquarium had sand dollars in many different colors, when all my life, I thought sand dollars were always white. Mr. Browning explained that “sand dollars have lots of tiny hairs, and they become blue or purple. What you and most other people see when they are white is just their skeleton. The tiny hairs that make sand dollars their true vibrant color fall off when they pass away, then their skeleton is washed up to the surface of the sandy beach near the low tide.”

Sand dollars have an even greater symbolism. Matthew 2:2 says, “where is the one who has been born king of the Jews? We saw his star in the east and have come to worship him.” This scripture shows Matthew in search of King Herod, during the time of the Nativity. Matthew and his people followed the star as a prophecy, soon leading his people to Jesus. Finally, the three wise men came to worship Jesus. As Matthew 2:10 says, “When they saw the star, they were overjoyed.” Matthew and his people were overcome with joy because they had realized that the star of Bethlehem was now the coming of their Savior. The idea of hope; the confident expectation of what God has promised, and its strength in his faithfulness are not everything that we want to be, or one day will be. But because God said it, it’s true.

I was told this religious story many times at a young age in church. I remember hearing from my Pastor when I was younger the legend about these creatures, which represent the story of Christ. On the top of the shell is a symbol that looks like a star, a reminder of the Star of Bethlehem that led the wise men to Christ. Around the star is what appears to be an outline of an Easter lily, a reminder of the Lord’s resurrection. According to religious legend, the four holes around the ends of the star represent the wounds of Christ, when his hands and feet were nailed to the cross. The center hole represents the wound made from a soldier’s spear. When you turn over the sand dollar, you see the outline of a poinsettia, the Christmas flower. If you break open a sand dollar, five dove-shaped pieces emerge.

My Christian faith tells me my brother is in heaven and the sand dollar’s symbolism brings me meaning, in that Jesus died for our sins and, in return, gave us eternal life. My brother is living his eternal life, and every time I arrive at any beach, I will attempt to find one of God’s creations, knowing that my brother will always be with me in spirit. Whenever you are at a beach standing in front of the ocean, stop, for just a moment. When the ocean is at its low tide, look along the sandy shores. You, too, can possess a natural treasure that could remind you of what means most to you, and you may be surprised to experience the footprints in the sand.