All About One of Denver’s Newest Venues, Number 38 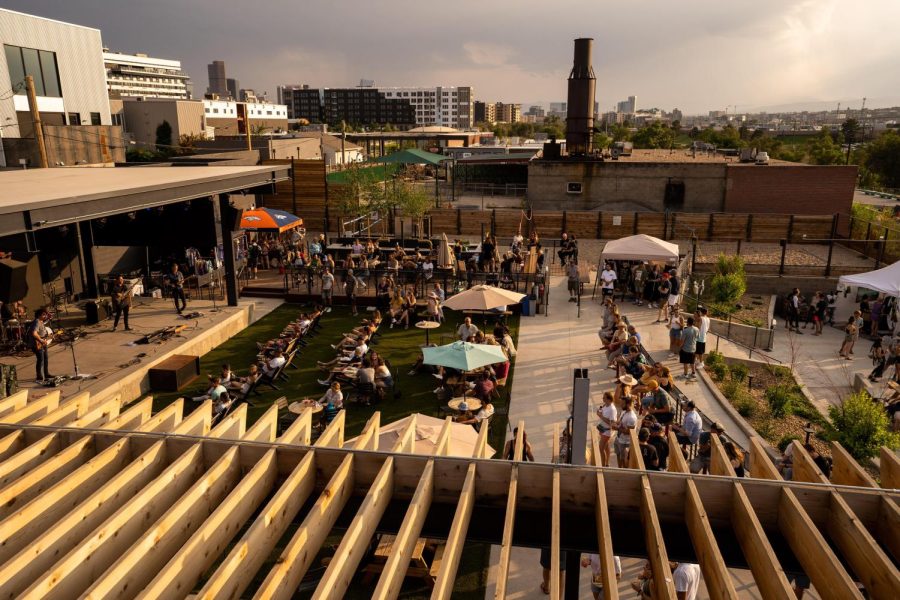 A bird's-eye view of Number 38. Image via Chris Tracy

If you’re looking for a new bar, restaurant, live music, or just a fun place to hang out in downtown Denver, then look no further than Number 38. Opened in Oct 2020, the venue is among some of the newest in RiNo.

The idea came about when CEO Spencer Fronk and COO Andrew Palmquist were bar hopping and noticed that while some venues are centered around selling beer, others have good restaurants, and others hosted live entertainment, it’s hard to find all three of those things under one roof. With the intention of creating a space that provided all of these things at once and doing so in their home city of Denver, Number 38 was created.

Number 38’s name came from the fact that Colorado was the thirty-eighth state to join the United States, and a love for Colorado is at the core of the venue.

“It’s all about celebrating Colorado. All of our beverage brands were produced in the state. We only serve Colorado beverages, and we have local musicians play every day that we’re open,” says Haleigh Shipley, the Marketing & Events Manager of the venue.

In regards to the live music, bluegrass bands and musicians have been a favorite of the staff and the public, but a wide variety of genres are included at the shows the venue hosts, from recent hip-hop showcases to frequent DJs. However, concerts aren’t the only type of event that takes place there.

Number 38 opened in late 2020, in the midst of the ongoing COVID-19 pandemic and starting a new business during this time inevitably comes with its challenges.

“It is not anything I would ever wish on anybody. It was so hard. The original planned opening date was going to be spring 2020, but that was right as COVID was hitting, so owners decided to push it back until later in the year. As we saw that it wasn’t really going anywhere, we asked ‘Do we delay opening by two or three years, or do we just open under the circumstances that we know we’re under and then operate with COVID in mind?’ That ended up being the strategy.” says Shipley.

Initially, the venue prioritized outdoor dining, created new layouts to ensure social distancing was in place, implemented a contactless payment system for customers to use, and had customers reserve their spot.

“It was just so, so tricky, especially in this kind of a venue and with the social nature of this venue. We’ve got Adirondack chairs, we’ve got picnic tables, high tops, indoor seating, outdoor seating, couches, bar stools… It was a lot of accommodating the public’s requests and just building a reputation because you’re brand new,” Shipley says. “It was a lot of adjustment and just trying to keep up with what the city was doing so we could operate legally. It was a lot of managing the public’s expectations. It was dealing with a lot of angry customers who did not want to abide by COVID mandates that we had to enforce.”

Despite starting in the midst of a pandemic, Number 38 has seen plenty of success. Publications such as Westword, 303 Magazine, Denver Post and the New York Times, as well as Channel 9 News, have raved about the venue and helped push their name out further, helping them gain even more traction within their first two years of business.

“We’re in a much better spot now and things are on the up and up for us. From this point last year, we’re somewhere around $500,000 up in sales,” Shipley states.

When asked about what some future goals and plans were for the venue, Shipley said that she wants to get more national touring artists to perform on their stage, and that those shows are in the works for later this year.

In addition, the venue owners want to bring in new local beverage brands from throughout the state, staying true to one of the venue’s main focuses of showcasing local beer. Finally, the company plans to expand the business and open a second location in Louisville, Kentucky called Number 15, with the hopes of making multiple locations throughout the United States that follow the same theme in regards to the venue name.

Number 38 is located in the RiNo Art District, at 3560 Chestnut Pl.