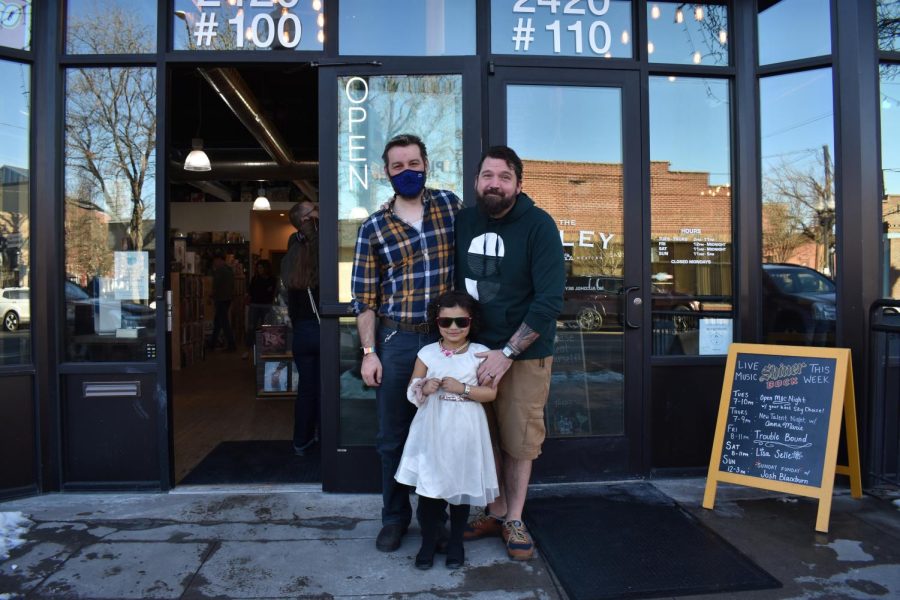 PlayForge is the hidden jewel of Main Street in Downtown Littleton. Whether it comes to creating inventions or fueling the imaginations of children and adults alike, this pop-up retail gaming store caters to all audiences.

Jesse Stommel runs the store along with his husband Josh Lee and their five year old daughter, Hazel Stommel-Lee (who is an expert play-tester, according to Stommel).

The family opened up the gaming shop on May 8 of 2021. Stommel is a teacher of 22 years and earned his education from University of Colorado Boulder. His husband earned his degree from the Colorado School of Mines and has worked in alternative energy engineering.

Josh Lee runs an Etsy store to sell his handcrafted creations. There, specially handmade items are made with woodwork skills and a Glowforge – a laser cutter and etcher which allows for attention to detail. Lee uses post-consumer material to create figures, supplies, and other innovative items for roleplaying games (RPGs) such as Dungeons & Dragons.

As complications arose from the pandemic, Stommel and his husband had to make tough decisions. The family of three wanted to be closer to relatives and opportunities that were inline with their passions, so they made the decision to move to Littleton. Lee was able to find a space where he could continue his craft, but also open doors for curious customers who would eventually like to sell their own handiwork.

“Someone can go from having an idea, pulling out an iPad, sketching or designing something, and then having it printed on a 3D printer, or a laser cutter and etcher… in a single day,” Stommel says. “We’ve had people come up with an idea and make something within two hours.”

As visitors walk in, they are exposed to a bright and open space that displays a plethora of interactive games. The retail aspect is all inclusive – PlayForge carries games for children, adults, young adults, and students. Right now, games made by women are featured at the storefront for Women’s History Month.

Stommel describes the store as an imagination-fueling experience for all ages. Being a family man who adores Dungeons and Dragons, he wants to ensure parents who are passionate about crafting, games, and all curiosities can enable their children to involve themselves in that world early on. In addition, Stommel wants to bridge the gap between adults and children in the world of gaming. PlayForge is set with the mission of making gaming and workshops an all-inclusive experience.

“Josh and I – with a five year old… really wanted to create a space where an entire family could come and find stuff for everyone,” Stommel says. “And also capture that feeling of an adult sharing something that they played when they were kids, with their kids.”

Stommel describes the shop as less of a retail experience and more of a constant communication with his visitors. In this sense, everything in PlayForge has the purpose of teaching customers and filling their curiosities, regardless of prior experience or knowledge.

Stommel says he “thinks of it as a playground.”

PlayForge has opportunities for anyone wanting to express their creative skills within leather making, wood working, 3D printing, and even detail work on miniatures. For younger audiences, summer camps are held to work on crafting or dabble in gaming. Generally, PlayForge holds many gaming events for all ages, where groups sit within the store area on wide wooden tables. These events can hold as many as 25 gamers.

“We focus a little bit more on events that are geared towards either kids or towards new players – essentially building that community from scratch so that you don’t come here and feel intimidated,” Stommel explains. “If there’s a Dungeons & Dragons night, you don’t have to ever have played Dungeons & Dragons in your life in order to join.”

Stommel sees frequent flyers from the ACC community. He acknowledges the support and relates it to his experience as an instructor. It’s no coincidence that PlayForge is so close in proximity to ACC, Stommel has had multiple conversations with teachers and discusses the MakerSpace at the college frequently. His desire is for the collaboration and construction of relationships to continue to grow even through unprecedented times.

“Someone comes in and it’s less like we’re selling stuff the way you might at a grocery store, or at other retail stores, where people know what they want when they come in,” Stommel says. “It’s more that someone comes in and they’re curious about something… I think of our job as less being salespeople and more being librarians, kind of curating an experience for people and helping expose them to things.”

More information on events, retail, and the store in general can be found on PlayForge’s website.