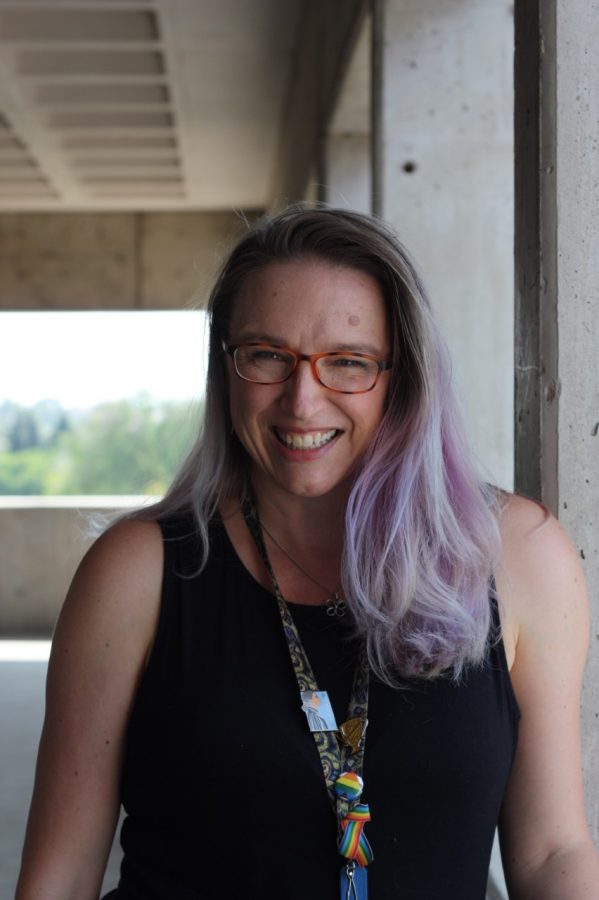 Monica Fuglei posing on one of ACC's balconies, September 23, 2021

After climbing the stairs from the entrance of Arapahoe Community College (ACC) to the second floor, a proud display of names and plaques can be seen adjacent to the doors of the library. The one that sticks out most is the plaque of Monica Fuglei, and it’s not just because of the bright pink hair she’s rocking.

As a faculty member and department chair, Monica Fuglei places importance on professional development and how her fellow coworkers interact with students in the classroom. Her endless contributions to the school and her motives as a teacher assist in making the campus more lively and bright – and again, it’s not just the hair. She is sure to note her strategy when it comes to reinventing how a typical ACC classroom operates. “When we’re talking about good teaching strategies, equity and inclusion are part of that… Breaking down some of the old structures of classrooms in terms of the power dynamic between teacher and student.”

In her office, Fuglei charmingly refers to the tall shelf holding her proudly earned knick-knacks as “the magpie shelf”. However, it’s not the illuminative objects that garner most of her appreciation; instead, it’s artifacts from students.

While referencing a student nominated Boettcher Foundation award, Fuglei remarked, “the more important thing to me wasn’t the award, it was her description of why she nominated me for the award.”

Fuglei was not only touched by being the first collegiate level professor to receive this award, but also appreciative of the connection she created with that student in specific. That is what her career is all about: the impact and influence she leaves on her students through education.

“The shiny things are great… but the reason that I do teach is because I think I really believe in the empowering impact of education, and believe it changes lives.”

Fuglei’s journey to ACC began in high school. Her major influences included her English teacher and history teacher, as both assisted her development as a critical thinker. By the time that she reached college, she began her path to a license in teaching. Halfway through, Fuglei met with her high school English teacher, who suggested that she go to college to teach college. She then bounced around between collegiate teaching jobs, knowing the environment would be more receptive of her thoughts and opinions. Although she initially settled on history or literature as a subject to teach, she eventually found there was something more. “I realized as I was teaching that first composition course, that there’s a profound amount of power in being able to write and helping people write.”

To her, writing felt like the core of that empowerment she values in education.

Fuglei unintentionally found ACC while driving by. She happened to notice a job opening, and her work as a part-time instructor began in 2005.

Before becoming department chair, Fuglei worked in concurrent enrollment. Fuglei makes it a point to create a cultivating space for every student she encounters. She became familiar with students and the struggles they had while taking collegiate level classes. Having an age range from 11 years old to 90 years old, she ensures that every classroom she leads is filled with connection and communication.

“The worst thing I can imagine as a teacher is not understanding the very real and rich lives of the students in my classrooms.”

When asked about her favorite thing about ACC, Fuglei decided on the lifeblood of ACC – the students. “I love the students that we have, the variety of lived experiences… There aren’t a lot of places where you can walk into a classroom and have a 70 year age range between your students.”

Fuglei appreciates her students taking charge, especially during the pandemic. She claims it would’ve been much harder to stay focused without the help of her students; whether it be them asking about missing classmates online or setting their own deadlines.

Fuglei says that anyone who meets her should expect to be regaled in nerdy pop culture references. They might experience a slight awkwardness along with being given random factoids. Fuglei hopes that everyone she meets understands that she is interested in connecting and learning who they are.