Surviving a School Shooting…And Then Reliving it Over and Over Again on Television News. 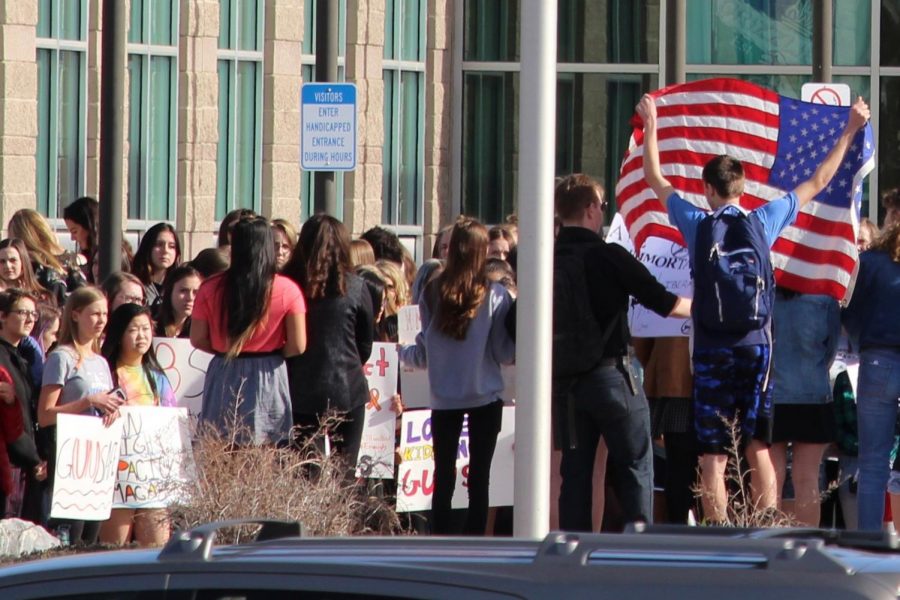 ThunderRidge students assemble in front of their high school on Wednesday, March 14, 2018, in Highlands Ranch, Colo. to express their concerns in the wake of the Parkland, Fla. shooting.

On April 20, 1999 one of the most horrific mass school shootings in history occurred 1.7 miles from my home at Columbine High School. Ever since I was two years old that is when my life was exposed to school shootings. I was at home with my mom, my father at work, and two older brothers in high school. Of course, I was too little to understand the concept of what happened and the media coverage of the tragedy. As I got older, I learned more about the devastating event that took place in my hometown community through media old and new. Growing up lock down drills were becoming a must when I was in school, but not how consistent it is today. I never imagined what I saw in the media could happen to me one day. I would not understand the severity until my own experience in my adolescence years.

11 years later I am in 7th grade attending Deer Creek Middle School. Two blocks away from my house. Just got home after a trip to California, my parents were adamant on me not missing school. February 23, 2010, I get ready for school like any other day. The end of the day was not like any other day. School is released 3:05pm and 32-year-old man with a trench coat came to the school property with a high-powered rifle firing off rounds. I was not doing well in science class and decided it was in my best interest to stay back vs mingle with friends outside. As I was pulling out my notebook and sat down, a few 8th grade girls ran into the room. In sheer panic as one girl holding her arm covered in blood from being shot informs us there is a shooter outside. We had no knowledge of if he got into the building or the general stances of the situation.

For three hours crouched down, complete silence, and complete darkness I was lost in my thoughts. Our cell phones were on silent and brightness lowest it could go. We could make one quick phone call. I left a voicemail for my mom and said, “I am so sorry I was mad; I don’t know what is going to happen, but I need you and dad to know how much I love you both.” I looked at an 8th grade teacher and whispered so quietly, “Will you please pray with me?”  We did. I believe to this day that prayer kept me calm, reassured, and accepted of the outcome. Another half hour later the swat team broke down the door to come rescue us. Single file line, hands behind our head we were told to run to the gym, out the door, and across the street to the elementary school. As fast as you can. Thankfully, no one died, my math teacher had tackled the shooter and saved hundreds of lives that day including mine.

Before my experience in a school shooting, I paid little to not attention to the media. I got my Facebook account in 7th grade and my parents would monitor it. I did not spend much time on the internet nor watching the news when ages 6- 12. I never thought I would go to school one day and have gone through what I did. Getting home and turning on my tv, seeing my school broadcasted all over the country and the reason it was being broadcasted. At what age do you start watching the news/media to where you fully understand the concept of what current event is occurring though? I never saw the shooter until his mug shot appeared on one of the news channels. It shocked me to point where I could not sleep for days having nightmares. My parents were glued to the media, newspaper, online articles as I stayed away. When returning to school the media was everywhere filling the whole street. They were interviewing students, faculty, and parents. I was one who agreed to interview with my dad along beside me. Looking back, I wish I did not. I let a reporter take a very emotional and traumatic statement at such a vulnerable time.

My perspective has changed on media coverage of mass shootings as I got older. Though the media does do a great job informing on breaking news and releasing what information they gather in such little time. I do feel they release more information that should be allowed. An article from The Washington Post written by Valerie Strauss shares facts I never thought to take into consideration. Since the massacre of Columbine in 1999 the media coverage of that shooting has been considered a playbook for school shooters. Strauss continues to explain the media shows 20 out of 46 school shootings, the shooter used Columbine as a blueprint. Innumerable amount of home videos, diary entries, stories, camera footage from the Columbine criminals themselves were made prior in hope it would be seen after they took their own lives. 1999 was a huge era for technology. Transforming into digital; 24-hour cable news and internet saving everything posted. Parkland, Sandy Hook, Santa Fe, etc. shooters were inspired by Columbine years later because the media shared more information that should not have been allowed.

I have very opinionated views on how the media should portray not only the victims but the shooters also. The media’s goal is to get as much information possible on the perpetrator and inform the public. Understandable, most viewers are curious to know why this happened, background information, mental health status, etc. I believe the media should not release anything on the shooter due to the past becoming fame seeking violence. The media portrays the perpetrator in the villainous role correctly but gives them more spotlight than needed. With all the news constantly relaying information about the perpetrator makes the recovering process for the victims more difficult in order to; heal, grieve, learn to live with the trauma. Rather than focusing on the perpetrator and evil the media can use its platform for the better.

As the media’s attention and all eyes are on the Covid-19 pandemic, the public assumes there have been fewer mass shootings. NBC Lori Ann Post, professor of emergency medicine and medical social sciences at Northwestern University wrote an article on “how covid may slowed down mass shooting but from Colorado to California, they are back.” She states, “this must start with journalists, who need to stick to the facts and not glorify or sensationalize. Agreeing on editorial standards, like refraining from using the perpetrator’s name and not speculating about how events in the shooter’s life may have contributed to the event, will help as well. Humanize the victims, not the perpetrator. Let us not give these murderers the one thing so many of them want — to be famous.”  There is much more the media can focus on than giving the fame the shooters want.

As citizens we need to start questioning the medias intuition when it comes to covering mass shootings. Rather than the media giving a play by play of the perpetrator’s steps in the shooting, and constantly repeating the name, what weapons were used, etc. Focus on the lives lost, what can be done to change this reoccurring epidemic itself. The media has trained us since Columbine to want to know all that we can about the perpetrator and all the details possible of the shooting. The media needs to rethink on how they cover mass shootings, focus on anything but the shooter and ending the fame seeking violence for the future perpetrators. The heroes need the attention not the villains.

Strauss, Valerie. “School Shootings Didn’t Start in 1999 at Columbine. Here’s Why That Disaster Became a Blueprint for Other Killers and Created the ‘Columbine Generation’.” Washington Post, 18 Apr. 2019, www.washingtonpost.com/education/2019/04/18/school-shootings-didnt-start-columbine-heres-why-that-disaster-became-blueprint-other-killers-created-columbine-generation.