The Arapahoe Pinnacle • May 7, 2021 • https://arapahoenews.com/21515/news/community/on-the-anniversary-of-the-stem-high-school-shooting/

On the Anniversary of the STEM High School Shooting

Trigger warning: Submission is a visceral retelling of the STEM school shooting from 2019. 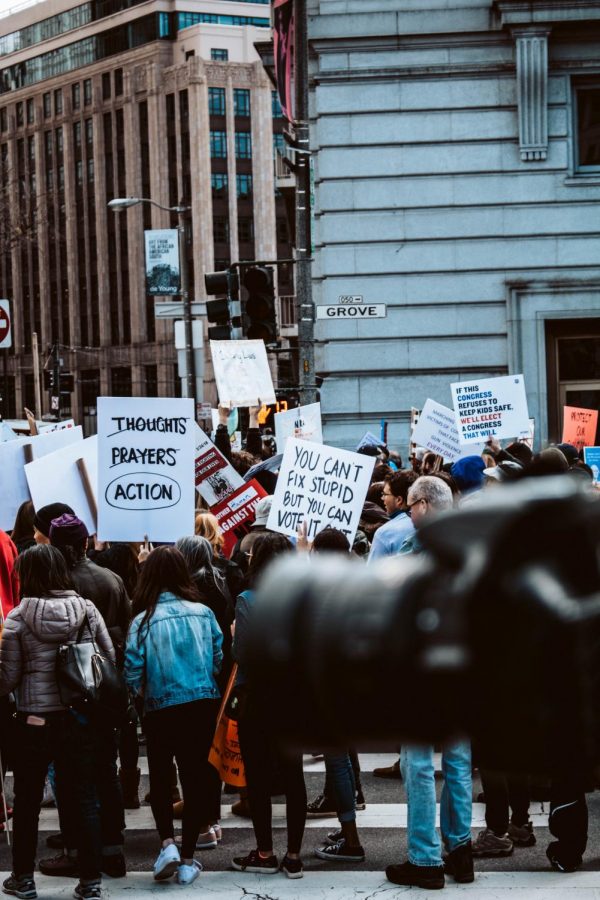 Photo by Natalie Chaney on Unsplash

There have been 304 fatal school shootings since 1999.

There is approximately 0.23218514 percent chance of being in school that has had a school shooting.

It takes 0.7 seconds to pull the trigger of a handgun.

The history teacher was sitting at his desk. It was independent work time. This was the last class of the day. School was almost over. I just wanted to go home and play video games.

“Attention please. Lockdown. Locks, lights, out of sight,” a recording of a somewhat androgynous voice came over the PA system. Students looked around in annoyance as they slowly left their seats, taking time to finish typing whatever they were working on before closing their laptops. The teacher turned off the lights and locked the door.

“Is this another drill?” someone questioned aloud.

Most of us pulled out our phones to play games or browse the internet. At this point we just thought it was a drill. Free time to screw around and avoid school work.

“Is this a drill?” someone asked the teacher.

We shelter against the wall perpendicular to the one with the door. These two kids kept talking to each other and making jokes, sharing memes on their phones or something. Someone tried to play a video, but their volume was turned up and it blared loudly in the room, causing everyone to start laughing.

“Shhhhh!!!” the teacher hissed in frustration.

As 9th graders do, they got quiet for about 30 seconds before quickly returning to ignoring the teacher. I can imagine the frustration he must have felt.

A few minutes have passed.

One of the students asked if it was over yet. They wondered why the drill was taking so long.

A message appeared on my phone in a Discord group chat I had with some friends. It was from my friend Jillian, who went to a school nearby.

“Nico are you okay everyone’s saying your school is having a shooting. We’re on lock out right now,” a chunk of text read.

“I’m sitting in a classroom,” I typed back.

I could hear some noise outside. It sounded like a lot of people talking. The noise of walkie-talkies filtered through the wall. I realized how thin that wall was.

Same as us, she couldn’t believe that a shooting was actually happening. It had be a threat or a false alarm. It couldn’t be real.

Suddenly, someone said, “I don’t think it’s a drill,” gesturing to their phone.

In an instant the idle chatter stopped, all voices being subdued only to the smallest whispers. Every kid pulled out their phone to see for themselves. Within seconds, my friend Kane was showing me a muted news livestream—helicopter footage of our school. There were ambulances and police cars outside. It felt unreal to see our school on the news like that. But reality set it. In that dark classroom, we didn’t know any more than everyone else. We were just as confused. We were getting our information from the same articles as everyone else.

I looked it up myself. A new article had just appeared. The headline read, “One victim shot at STEM School Highlands Ranch.” I sent the article to the group chat. It wasn’t a false alarm. It wasn’t a drill. Other friends started to appear in the group chat.

“HOLY SHIT TODAY ??” my friend Olivia typed in reference to the article.

My phone started lighting up with messages from all sorts of people. Classmates from middle school I had only talked to once. Acquaintances from when I’d lived in other states. Relatives. Online friends watching our school on the news in their countries, asking if that could possibly be the school I went to.

Our classroom was on the second floor beside a staircase. I heard footsteps on the stairs. A flurry of shouts erupted from the opposite side of the hallway.

The contents of their voices were mostly incomprehensible to us, but I just barely heard someone say, “Put it down!”

Muffled voices continued to fly back and forth. I thought about where we were in the room. Was that the shooter? What would happen if they entered? The wall we were sheltering against was not close to the door. The door was the only exit. If the shooter entered we would all be sitting ducks in full view with no cover to charge them while at the same time having no other exits. Come to think of it, what was the point of us sheltering on that wall? To make us easier to shoot? There was no window in our classroom door. Wouldn’t being near the door offer us the best tactical advantage?

I told myself I couldn’t die. The police or security were right there. Even if those footsteps on the stairs were the shooter, the police wouldn’t let them enter. But I thought about those thin walls again. I wondered if a bullet could pierce them. And in retrospect, it could have. On the other side of the school where the shooter first opened fire, someone was shot through the wall.

I sent my final messages in the group chat until the end of the day, “I think the shooter is outside. The police are telling them to put down the gun. They are yelling back and forth it’s really loud. Pray for me.”

The lockdown alarm continued to blare, but the commotion outside quieted. Time ticked on in silence. No one knew how this would end. How do we leave the classroom? We had never told how that would go. Drills never covered that sort of thing. I don’t think they ever expected a real shooting to happen. When do we leave? Was it over?

There was a click at the door. Someone had unlocked it. For a moment I thought it might be the shooter. But how would the shooter have a key to the room?

The door swung over as shafts of sharp white light illuminated the darkness. A group of SWAT officers rush into the room, guns trained on us and the teacher, bright lights in our eyes. Now I realize why we sat against that wall in full view of the door. It wasn’t to protect us from the shooter. It was to protect us from getting accidentally shot by the police.

I had my phone in my hand, so I dropped it. It took weeks to get it back, and when I did I spent all day responding to missed messages and calls. They had to search every room and backpack in the building before we could pick up our stuff.

Staying as a group, we shuffled out of the classroom from behind the barrels of military-grade M4 rifles. In the hallway our class joined a thin stream of students being herded between checkpoints of police until the exit to the school. We kept our hands up the whole time, and no one dared make the slightest movement of lowering them. Even when we came back to school in a few weeks, the police would still be there, watching at the entrances and exits, patrolling the classrooms, standing guard in the cafeteria.

The classrooms were being cleared individually. Every one of us was a potential threat. There had been two shooters in this case, an extremely rare occurrence, making the potential threat every one of us posed to the police even greater. They entered every room assuming there might be another threat inside.

We exited outside into the daylight, a shocking change from the dark interior of the school. But even out there, we hadn’t gotten through the danger. We walked down a narrow path in the street outside the school through a sea of police and ambulances. There was a layer of police and SWAT officers on either side of our path, their guns ready to open fire at any moment until we reached the field where we could sit down and finally lower our hands. All it took was two kids and a gun to summon this entire army.

I noticed snipers perched on roofs of the shops around the school, watching the line of students through their scopes.

If one of us had lowered our hands, would we have been gunned down right there?