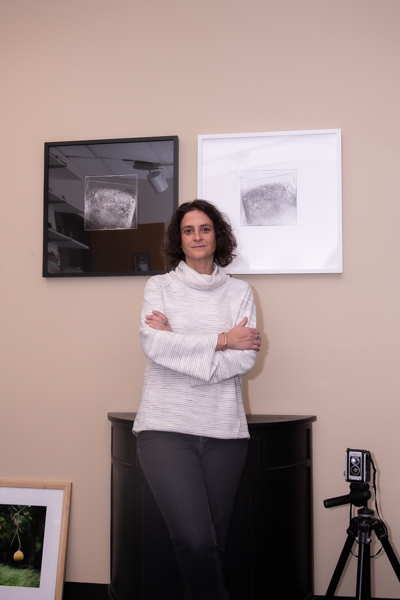 The Art & Design Center's Program Chair Angela Faris Belt Standing in her office in front of her artworks.

Angela Faris Belt is the Chair of the Studio Art & Art History Departments at Arapahoe Community College (ACC) in Littleton, Colorado. Angela joined the ACC faculty in the 2014 as a professor, but ACC is only the most recent stop in her long career as an educator, a career that has seen her teach at the Universities of Dayton and Michigan, Antioch College, and Anderson Ranch Arts Center. She had her career path planned out in high school, with the plan to be teach at the collegiate level, and a literary teacher told her what she had to do to achieve her goal. “You get the highest degree in the thing you love the most, then you can be a college professor.” For Angela’s case, she needed to get her Master of Fine Arts (MFA) Degree, which she did in parts at the University of Dayton (Ohio), and the University of Michigan.

Angela’s primary upbringing took place in Ohio, but she lived in many places before moving to Colorado 18 years ago, such as Tennessee, Michigan, and North Carolina. She loves the peace of mind that comes with nature, and anywhere she’s lived, she’s made sure to surround herself with woodland nature, and center her art and photography around the natural beauty.

Additionally, her work has been displayed on numerous occasions in Denver’s Month of Photography, and you can view her work at her own website, at https://www.angelafarisbelt.com/.

Her favorite thing about teaching at ACC is watching her students her students make progress in their learning. “When you see your students make a connection, and make something they’re really proud of and that they’ve also learned something about any number of things; that’s the most rewarding thing that I’ve found with teaching.”