How COVID-19 Has Affected Vulnerable Populations In Colorado 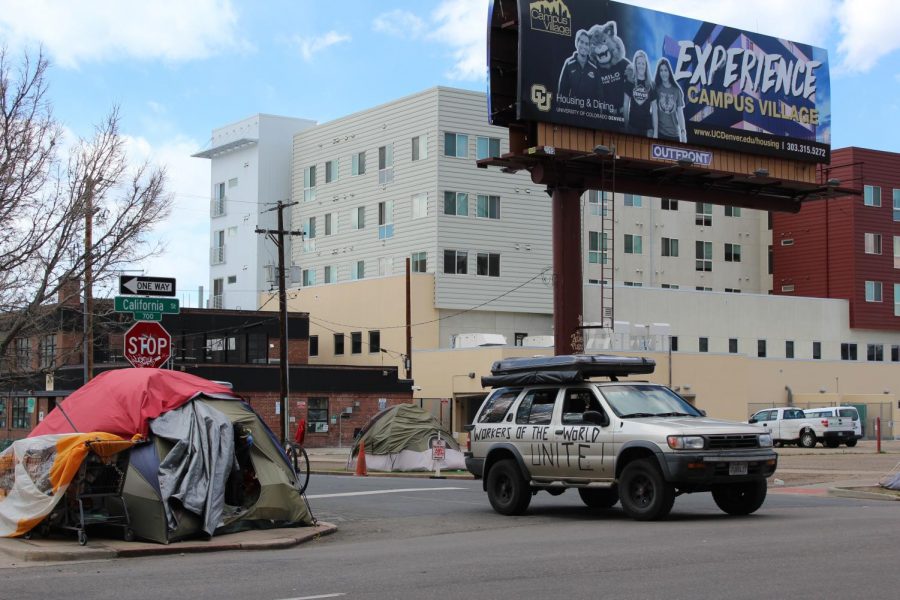 A car with the words "workers of the world unite" drives past a tent on California St on April 25, 2020.

Update: The 2019-20 Pinnacle Awards saw reporter Juana Rocha’s featured image as a finalist. Earning an honorable mention in the ‘Best General News Photo’ category. To commemorate Rocha’s achievement, the article, originally published on May 18, 2020, has been re-run.

People of color and immigrant communities nationwide have always been disproportionately targeted by economic and health disparities due to lack of access. COVID-19 has just amplified that. On April 13 2020 The Colorado Department of Public Health and Environment (CDPH) released all available race and ethnicity data on coronavirus cases in the state. The data presents just 75% of all reported cases showing the virus targeting Hispanic, Black/African American and Native Hawaiian/Pacific Islander Coloradans statistically higher in comparison to widespread cases.

“There is no equality, in my opinion, when it comes to access to quality healthcare in the United States. . .so are we receiving the same level of care as the majority community? And I don’t believe that we are, which then leads itself to the desperate outcomes that we are witnessing right now not only in Colorado but nationally” says Alfonzo Porter, the Editor-In-Chief of the Urban Spectrum, a Denver publication serving communities of color (full disclosure: currently my professor).

Porter lost his mother to COVID-19 earlier this year. He expresses that we need to look at national legislature when it comes to healthcare stating that the previous administration attempted to provide quality access across the board with the Affordable Care Act however, those steps have been rolled back by the Trump administration and continue to roll back access to a vast majority of American people. In black and brown communities, higher levels of cortisol hormone due to environmental stressors lead to underlying health conditions. “The impact will be the fact that the American people themselves will see the disparities, although we’ve been kind of saying these things for years. . .when you are bathed in it, when you exist in a high level of cortisol within your blood system, within your brain, it lends itself to higher levels of physical and health issues.” Says Porter adding that until we address these high levels cortisol that black and brown communities experience around the clock, the conversation is a non-starter.

Since mid-March, states have slowly implemented Public Health Orders to slow the spread of COVID-19. In a press briefing from Jared Polis on May 6, 2020, the governor of Colorado, stated that while we have succeeded in flattening the curve in the state, we have lost over 850 Coloradans. “. . .At the beginning of this crisis modeling was showing tens of thousands of deaths in Colorado and a catastrophic breach of our healthcare systems by now, but thanks to the actions you took and the success you had staying at home, we averted that.” Says Polis. These requirements have impacted residents across the state differently with many facing loss of income due to the closures of non-essential businesses. To alleviate economic stress, Congress passed a $2 trillion economic relief package, the Coronavirus Aid, Relief, and Economic Security (CARES) Act on March 27, 2020.

While Congress has enacted a method of alleviation for most people living in the United States, many are still left without a solution. For people living in the United States undocumented, there is no stimulus check. According to American Immigration Council, immigrant-led household paid $2.3 billion in federal taxes and $1 billion in Colorado state and local taxes in 2014 through Individual Tax Identification Numbers (ITIN) Under the CARES ACT, United States citizens who filed jointly with their spouses of immigrant status, are also ineligible to receive stimulus checks. Migration Policy Institute, a nonpartisan research institution focused on improving immigration and integration policies through research and analysis, estimates about 1.2 million American Citizens are married to undocumented immigrants.

This has left local community organizations and members to advocate for each other. To gather insight, the Pinnacle reached out to Cristian Solano-Cordova, the Communications Director at Colorado Immigrant Rights Coalition, a coalition of about 95 organizations that work to coordinate strategy and messaging across origination members and push for legislation and policy from different angles.

“There are disparities in who is getting COVID the most and those have a lot to do with socioeconomic disparities. . people of color tend to be of lower socioeconomic status working labor intensive jobs. . .people of color, in general, have been harder hit by the whole situation from health disparities and higher layoffs despite being a lower percentage of the total population.”

If a person needs healthcare access, they are eligible for emergency Medicaid in Colorado, regardless of immigration status. However, Cordova explains that because of fear of public charge, people of immigrant status are discouraged from accessing it for fear of being placed on a list. The rule of public charge was implemented last year by the Trump administration allowing the government to reject the obtainment of U.S. residency or a green card if a person is seen to be dependent on government assistance. Cordova says it is important to note that emergency Medicaid does not fall under the public charge rule.

As for the economic impact faced by many immigrants across Colorado, families left without jobs, stimulus checks, or unemployment benefits during the crisis revert to finding any job they can do despite putting themselves or others at risk. For now, Colorado Immigrant Rights Coalition has focused on advocacy work and meeting with state and federal level leaders about the disproportionate impact on immigrant communities. “At the federal level I think we have been less successful just given the anti-immigrant sentiment nationwide led by the president, so it has been more difficult to get anything passed through there, but we’re still trying.” At the state level, they have organized member organizations and community leaders to sign a letter to the governor urging him to pass data protections for undocumented people as well as resources for immigrant Coloradans who are ineligible for federal aid.

In a letter to Governor Jared Polis sponsored by Colorado Immigrant Rights Coalition, the governor the letter states:

“Our immigrant neighbors, co-workers, and friends are vital to the State’s economy. Their work supports our ski industry during the winter, our recreational tourism industry and our commercial real estate industry year-round, and our large agricultural sector across the state. In the fight against this pandemic, we are all in this together, and we urge you to prioritize supporting immigrant Coloradans with no access to federal relief during this critical time.”

On March 20, 2020, Polis gave an update about Colorado’s Coronavirus response through a press briefing. Polis expressed that while all Coloradans were at risk for the virus, protection for our most vulnerable communities, those older than 60 with underlying conditions, were especially at risk. As previously reported by the Arapahoe Pinnacle, many assisted living facilities were hotspots for the virus including Libby Bortz Assisted Living, an affordable assisted living option in the Metro Denver area. During this briefing, the Colorado Covid-19 Relief Fund was formally announced.

This fund is set up to assist communities disproportionately affected by COVID-19 and funded by Coloradoan Philanthropists and community members. Currently, about 4.8 million dollars in funds have been awarded to 371 community-based organizations serving Colorado. The latest recommendations by the Community Voices Committee for the next round of funding for upcoming deadlines list priority funding for housing support of incomes of less than $30,000, 18-29-year-olds, urban and single women living on low or low(ered) income, people with disabilities, and African Americans.

People of color across Colorado will continue to trek through the unknowns of this pandemic and the disparities that will come from it. Cordova reminds us that the Census is a great way to advocate for ourselves and that it is important when it comes decisions about funding distribution, “a lot of people in the community might not know the importance of the census but it only comes around every 10 years and especially in times like this when crisis happen we see that funding at the local level shrinks up for healthcare, education, for a wide variety of things. . .it’s even more important for us to participate from our newborns to our senior citizens, everyone needs to make themselves counted.”