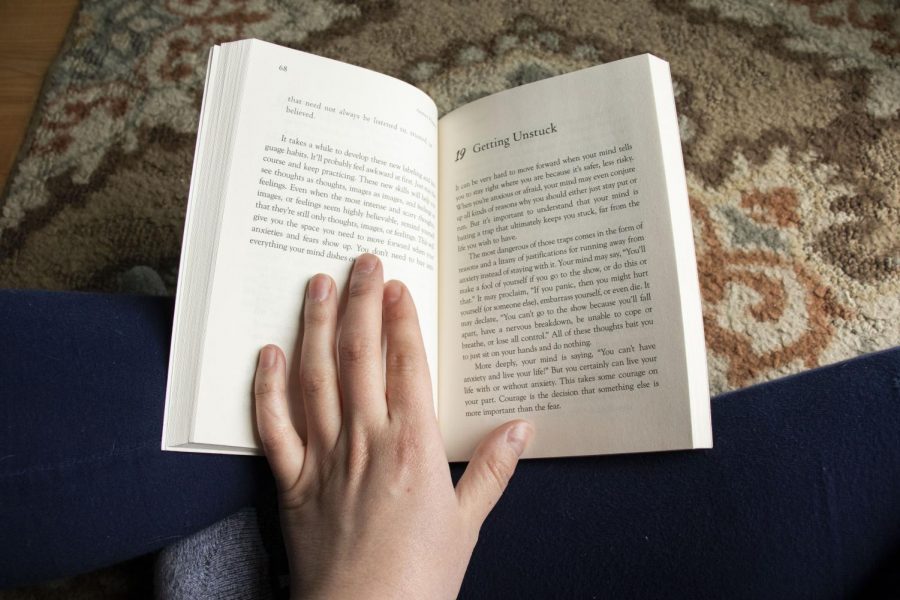 Holding a book on a chapter titled "Getting Unstuck" Wednesday, April, 15 2020.

Just about every teen movie I can think of relays the experience of just how hard life can be when you are young and trying to figure it all out. The never-ending trope of finding a high school sweetheart seems to dominate the genre, overshadowing some of the most common concerns teenagers experience. Especially the anxiety accompanying the question, “What are your plans for the future?”

What an impossible thing to be asked at that age. Who knows themselves well enough at that age to decide where they want to be in 10 years, nonetheless 40?

Around the same age, I was being asked to decide what I wanted to do with my life, I was—finally—getting my braces off and waiting for the latest season of One Tree Hill to hit Netflix. I spent my evenings rehearsing with my dance company and weekends hoping my best friend would sleep at my house instead of the other way around—my house had better snacks.

Besides the trivial day-to-day things though, I spent a lot of my teenage years struggling to define myself. Not in terms of how I would present myself, but what it meant to be me: a living, breathing human on this planet with an existence just as complex as every individual around me. The thought alone sent me into a panic. My only way of coping with such a perplexing idea was to dissociate from the world with the intention of simply figuring it out later.

I am quite sure several philosophers have articulated the dilemma of consciousness and its meaning much more eloquently than I possibly could—i.e. Descartes and his famous “I think, therefore I am.” Since I knew I never had to worry about making profound statements like this for the world to read for centuries to come, I did my writing in a small notebook from the Denver Art Museum. A green spiral-bound journal with a photo of Van Gogh’s “Almond Blossom” piece on the front. At the end of each day, I attempted to record my experiences and the consequent reactions, the ins, and outs of my own consciousness.

While this habit persists today, it often falls short in providing the necessary comfort to keep me grounded.

The summer before my final year of high school, I decided to bring an untouched book to the lake with me and my family. A book with a simple cover and only a couple hundred pages, unfortunately collecting dust on my shelf. A family member gifted it to me the year before on my birthday, but I never considered reading it in addition to the required books I was already tasked with.

On that day, I sat with the uncomfortable heat, the slightly fishy smell of the lake, and The Spectacular Now. Reading it front to back and rarely stopping for a break, I left that day feeling severely sunburned but unexpectedly content.

For the first time since starting high school, I read a book entirely for myself. While I can say I genuinely enjoyed assigned classics such as Of Mice and Men or The Great Gatsby, those came with strings attached: annotations, essays, the occasional test on deeper symbolism. Tim Tharp asked none of this from me. His main character struggled with issues I could never fathom experiencing yet so many others I had not previously realized existed universally.

I felt seen by a story of fictional characters; individuals who existed in the reader’s imagination and the hearts of every lost or confused teenager simultaneously.

That afternoon, with that book, I found a way to escape from the never-ending cycle of thoughts and anxieties. A temporary break from the discomfort of my own body. Of course, a singular book did not impact my brain the same way antidepressants eventually would, but it did open a doorway for me to see that there was another side to it all. That summer, I read a book every day or two, allowing myself to learn the diverse experiences of different people, but also see the ways that we are all so similar.

Realizing the universality of my own sentiments toward young adulthood and the ever-so-looming “future” allowed reprieve. By reading books and learning others’ experiences, I suddenly felt more comfortable with my own age of discomfort.