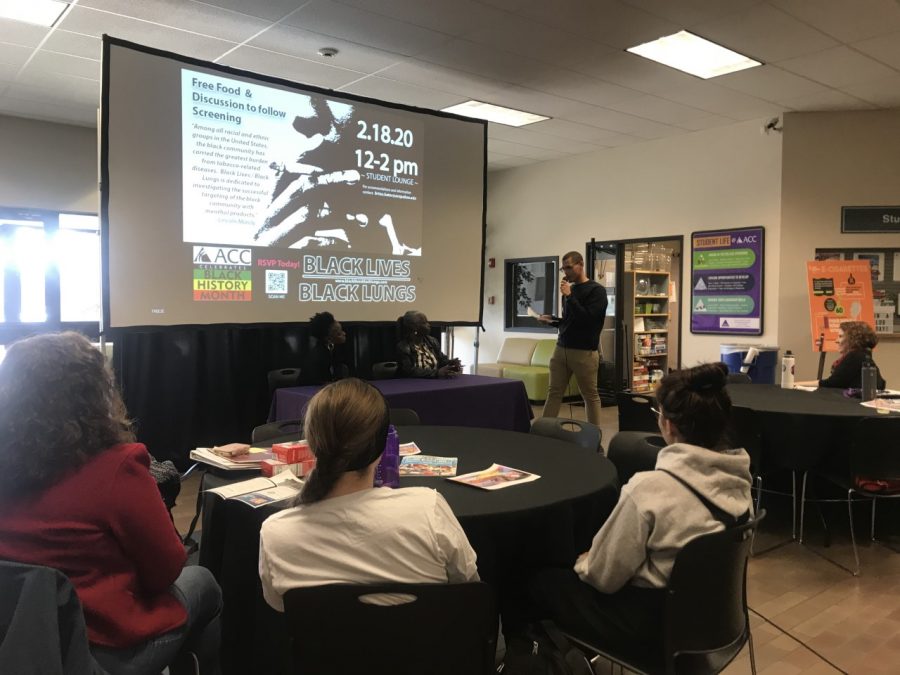 On Feb. 18, 2020, Arapahoe Community College hosted a screening of the short film, Black Lives / Black Lungs, by Lincoln Mondy. The film investigates the tobacco industry’s history into successfully infiltrating the black community, ultimately leading to the high tobacco-related disparities that we see within the community today. The event was hosted by Student Life and supported by Truth Initiative to further promote a tobacco-free campus after the passing of B 2018 011. Truth Initiative is an organization that informs and educates people on the use of tobacco and vaping products. The event had around 20 students in attendance including ACC’s president, Diana Doyle.

Truth provides events that they want to be promoted on campuses but provide student leaders the autonomy to create other events. Sophomore Cayla Enger, a student leader for the Truth Initiative on behalf of ACC, organized. Panelists were chosen because of their insight into how tobacco has affected black communities in the state of Colorado. The panelists were Thelma Craig, a chairperson, and program manager for the Colorado Black Health Collaborative, Pamela Thompson, director of Allied Health: Health and Public Services at ACC. Enger says she watched the film and it inspired her to hold the event in honor of Black History Month.

“Before doing this with Truth I never knew that this public health issue was also a social justice issue. It completely opened my eyes to that whole aspect of big tobacco and how they target market, not just the black community, but LGBTQ community and women. It’s definitely a social justice issue,” says Enger.

Carl Elston, a sophomore at ACC, was chosen as the master of ceremony for this event. Elston told the Pinnacle that he felt it was important for the student face of this event to be a person of color because it can make way for more discussions of inclusion on campus. “That way black and brown people, disenfranchised students and minority students can get behind an event like this and have more events where we can talk about our identity and problems that we face as underrepresented students.”

Addiction is about brain chemistry and access. After WWII, tobacco industries targeted black communities through marketing and TV ad commercials with menthol cigarettes, as well as scholarships, civil rights movements and provided the first high paying jobs to minorities. The tobacco industry pulled people in. The film featured black activists and experts fighting to inform and reverse the damage done to black communities by big tobacco.

Concluding the film, a discussion led by Elston was held about how the tobacco industry has affected black communities specifically in Colorado and what solutions are available. Guests in the crowd were also encouraged to ask questions.

“What are the current campaigns you have heard of or been a part of regarding the fight against flavored tobacco products?” asked Elston. Thelma Craig answered by stressing the importance of discussion among the community to find a resolution. She mentions that the Colorado Black Health Collaborative is currently working on a project called “Flavor Dangers: Avoiding The Trap of Menthol and Other Flavors,” a symposium and community town hall. She encourages ACC students to attend and join the conversation.