Breaking Through a Century of Red Scare Hegemony 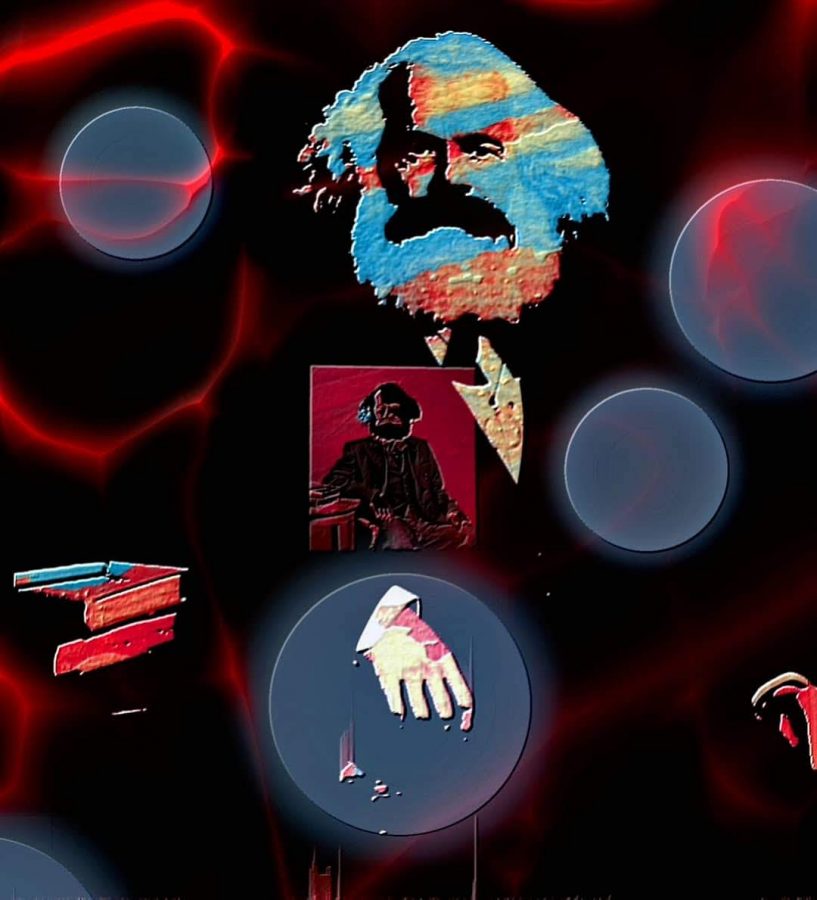 Collage of Karl Marx, courtesy of the artist, Dirt: Son of Earth, @art.o.dirt on Instagram.

Over the past century the American public has been subjected to anti-socialist propaganda across all types of media. Starting with “anti-red” union busting political cartoons and newspaper narratives in the early 1900’s, on to pro-war patriotic propaganda films and pamphlets during World War 2, corporate owned TV news, as well as decades of anti-communist red scare Hollywood movies from the McArthy Era and Cold War. Americans had been trained to view Socialism as taboo and it was incredibly difficult to find any media that strayed from these capitalist and imperialist narratives until the rise of the digital age allowed new ideas to finally slip through the cracks of traditional media gatekeeper control.

The first examples of anti-socialist propaganda began in the early 1900’s when radical anarchist and pro-labor action was incredibly common. According to Christy Schoeder’s Georgia State University thesis titled, Red Scare Propaganda in the United States: A Visual and Rhetorical Analysis,
“Newspapers began to publish articles denouncing the violence and calling for action to be taken against the radicals, who by this time had become commonly known as “Reds.” Typically, no clear distinction was made between the communist radical and the anarchist radical; they were seen as working together for the common cause of social, political, and moral chaos. Thus, most of the writings against communism and anarchism were directed simply at “radicals” or “Reds” without any sort of discrepancy between the two groups.”
These newspaper narratives and political cartoons began a proud American tradition of distorting any understanding of distinctions between different leftist ideologies as well as the normalization of violence against pro-union labor activists.

As World War 2 ended and the Cold War began, comic books became a popular medium for Red Scare propaganda. Generations of comic book reading youth had their opinions shaped by patriotic superhero’s like Captain America, dystopian visions of America falling to the hands of godless communists and constant depiction of Soviets as heartless villains.

In an Open Culture article titled, “The Red Menace: A Striking Gallery of Anti-Communist Posters, Ads, Comic Books, Magazines & Films,” author Josh Jones summarizes a 1947 comic titled “Is This Tomorrow?” that was typical of this era’s Red Scare propaganda, “This 1947 comic implicates government regulation of business, social welfare programs, anti-religious sentiment, and ‘people giving up their silly ideas about ‘sacredness’ of life’ in a fiendishly orchestrated plot to take over America. Workers who embrace Communist doctrine are little more than dupes and pawns.”

However, the most popular and culture shaping form of propaganda from the Cold War era were Hollywood films. Across all genres and all budgets, Hollywood had a consistent pro-capitalist narrative. The 1950’s-1960’s saw production of corny B-movies like I Married A Communist, as well as classic films like The Manchurian Candidate and Dr. Strangelove. This trend went on through the 80’s with decade defining films like Rocky IV and Red Dawn. Nearly every time an American went to the movies they were being subjected to political programming. This type of culture shaping is incredibly effective because people let their guard down when consuming entertainment opposed to news or political opinions.

After the fall of the Berlin Wall and death of the Soviet Union, American media  and culture entered a more calm and homogeneous period that philosopher Francis Fukuyama summed up in his 1989 essay titled “The End of History”, “What we may be witnessing is not just the end of the Cold War, or the passing of a particular period of post-war history, but the end of history as such … That is, the end point of mankind’s ideological evolution and the universalization of Western liberal democracy as the final form of human government.”

While red scare propaganda began to die down because communism was thought of as a failed ideology, free-market capitalism and deregulation began to be pushed more heavily across all news outlets. This was partly due to the abolishment of the Fairness Doctrine in 1987 as well as the Telecommunications Act of 1996. These two acts shifted the Overton window much further to the right, led to corporate media monopolies and created completely one sided news programs and networks like Rush Limbaugh and Fox News.

This era of hyper-capitalist corporate owned media hegemony went on unchecked until the market crash of 2008. While most media outlets didn’t change their tune, the American public was shocked as they saw free market capitalism nearly lead to the destruction of the economy. This led to increased popularity of left wing bloggers like Heather Digby Parton as well as independent left wing news shows like The Majority Report and The Young Turks.

In a personal interview I conducted with Journalist and Michael Brooks Show co-host David Griscom, he describes the benefits of listener funded programming thusly, “Because I know my audience I’m able to bring coverage of important issues in political economy that affect everyday people. Because most of the money in financial journalism is provided by people who have an interest in the speculative economy the coverage is skewed toward the rich. I’m able to cover important developments that affect working people. Since The Michael Brooks Show is funded by listeners I don’t have to worry about offending any financial interests with my coverage, which unfortunately affects lots of economic journalism. The relationship also gives me direct feedback from listeners which helps me craft coverage to their interests.”