Bold Women In History- But Make It Collage Art 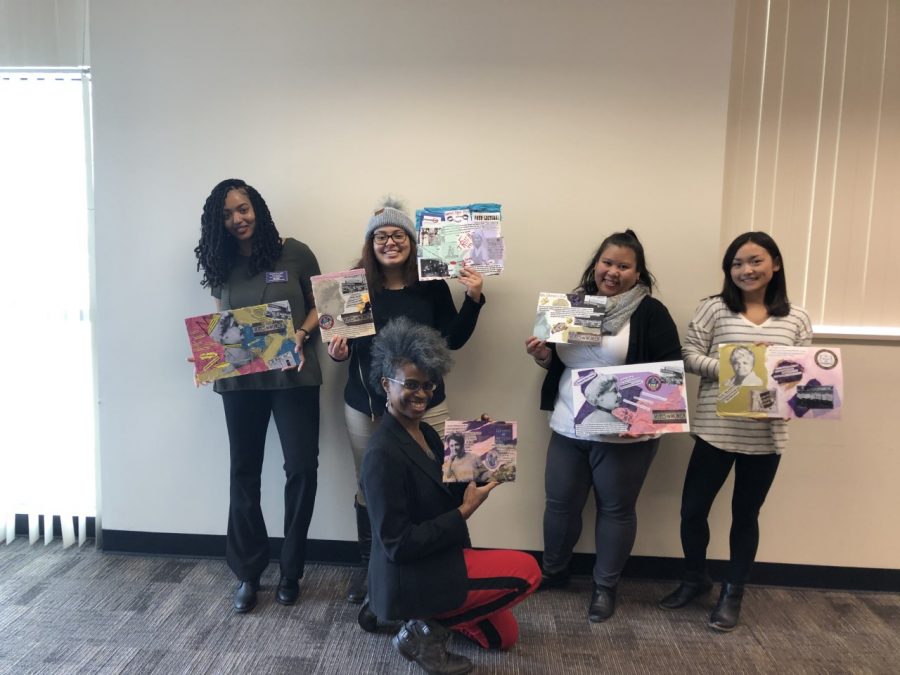 Adri Norris poses with ACC students and their collage art at the Parker Campus on Feb. 6, 2020.

Representation and discussion matter. Arapahoe Community College understands this, and Student Life has put together events around all three campuses to celebrate Black History Month.

Last week on Feb. 6 the Arapahoe Pinnacle attended a collage class and discussion with local Denver artist, Adri Norris at the ACC Parker campus. The event was hosted by Sarah Lindahl, coordinator of Student Activities at Arapahoe Community College. The purpose of the event was to provide historical context about the radical woman in history and to inspire creativity in participants to display their message in the form of collage art.

The event began with an introduction about who Adri Norris is and her journey into her series Woman Behaving Badly. Norris has been creating art since the age of 7 and attended the Art Institute of Colorado for animation. She later became inquisitive about stories of women in history that were not well known. She booked a show for 2016 during the election year when Hillary Clinton had won the nominee for Democratic president, because of this moment in history, the curator of the show suggested she do something in reference to women’s history. This led to Norris’ creation of her Women Behaving Badly series based on the quote by Laurel Thatcher Ulrich, “well-behaved women seldom make history”.

Seven women attended the collage event held at the Parker campus. Purple tablecloths were set up at each table along with craft supplies including colored tissue paper, glue and markers. Pages of information about influential women including Ida B. Wells, Sojourner Truth, and Elizabeth P. Ensley were given to each participant to choose from. These pages enclosed background stories on who they were, quotes, images of these women and images of things going on during their movements. Participants were asked to take in the information and create artistic pieces captivating their moments in history. Pizza, cheese cubes, and cookies were served.

For Adri Norris, representation of women in history is imperative. When she begins her process, she seeks to answer three questions: Who is she? What did she do? Why does she matter? Her research ranges from history books to conversations with historians. Norris started her first round of research with a little bit of everything. Her second round was centered around women who had won the Nobel prize followed by queer and trans women in history, then women in the performing arts and currently focuses on women in sports.

“It’s a matter of finding diversity and really making sure I am not telling certain kinds of stories because that’s the thing that keeps happening,” says Norris. She explains that she seeks to make sure that women of all races and ethnicities are represented in her art. “Who is marginalized, who do we not hear about? I am working my way to showing greater representation” states Norris.

Norris hosts these events mainly in middle schools and after school programs where, instead of providing the information, she asks the students to research their own “sheroes” in history. This provides students with the opportunity in the creative process to find people in history they feel represents them.

Other projects Norris is working on include art shows and a coloring book with illustrations on woman’s suffrage that should be out this April. Norris is hosting a final event at ACC’s Littleton campus on Feb. 20. Students can RSVP here.