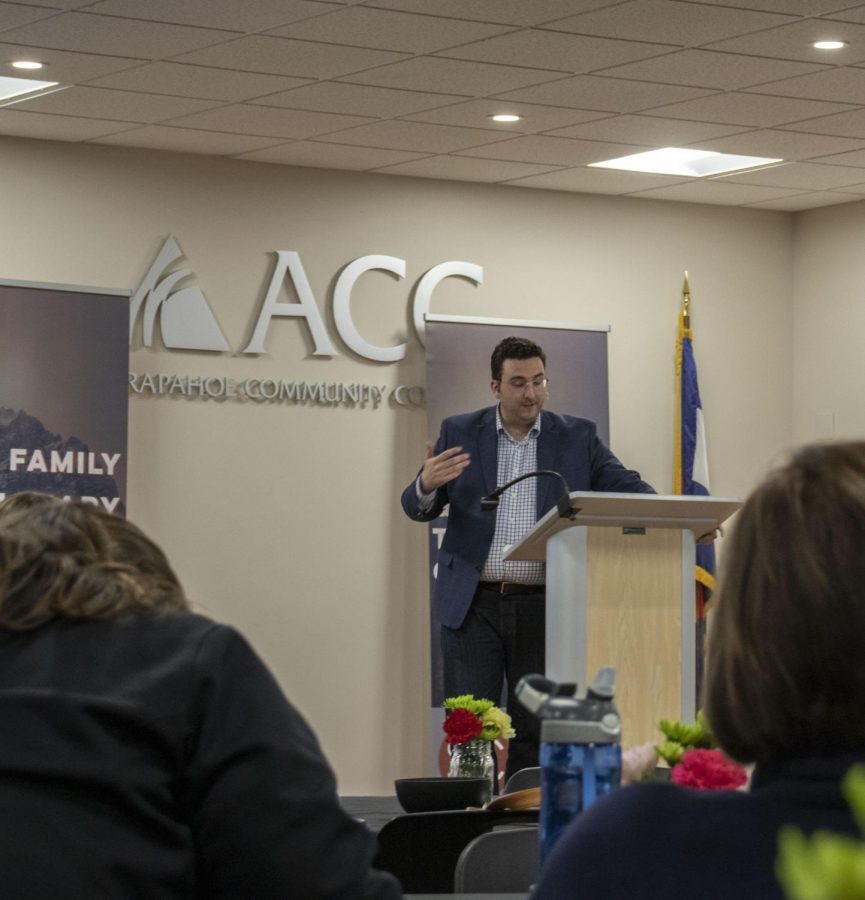 Michael Wear speaking in the Summit Room at Arapahoe Community College on Wednesday, Feb. 5, 2020. This event was held for Sola Church and Denver Seminary students, to talk about politics and the relationship between faith and political activity.

On Wednesday, Feb. 5, 2020, Sola Church held its first session of Kingdom and the Nation at Arapahoe Community College. The session featured Michael Wear, the Chief Strategist and a member of the executive team for The AND Campaign. Wear talked about the connection between people’s faith and political pursuits.

Wear didn’t grow up religious, but in Buffalo, New York, where he was born, everyone was “born catholic.” When he was young, his mother stated, “religion was like brushing your teeth in the morning, you just did it”.  Like many of his peers growing up, he didn’t really understand religion and internalized it. He believed that the Bible was so contradictory, though he had never read it. He viewed religion as a crutch even though he never discussing actual experiences with religious people.

In the end, he could not escape God. “The God that did not exist was everywhere,” Wear shared. His sister became a Christian a few years before he did and ended up inviting him to a youth group. One night when he was leaving, a volunteer was handing out little books on Romans, which he ended up reading twice and it changed his life. This is when he gave his life to Christ.

After this life-changing event, he then realized that he wanted to focus on what it was like “being faithful in the public light.” And this started his work as a leading expert, speaker, and strategist at the crossing of faith, politics and American public life.

Throughout the event, Wear also talked about on the studies of political stressors. He mentions post-election stress disorder, that when your political party loses, your stress level goes up. More studies are being released that show nearly 2 out of 5 Americans say that politics was stressing them out. “Political circumstances are changing our view of life,” Wear said.

There were also a couple of references to the Bible and a strong central point on political polarization, he compared polarization to Paul’s letter in the Bible. This occurs when two sides are deeply divided and far apart on policy preferences.

Nearing the end of the discussion, Wear stated, “Hold on we [Christians] must.” He reminds the audience that there is “hope for politics because we have Jesus.”