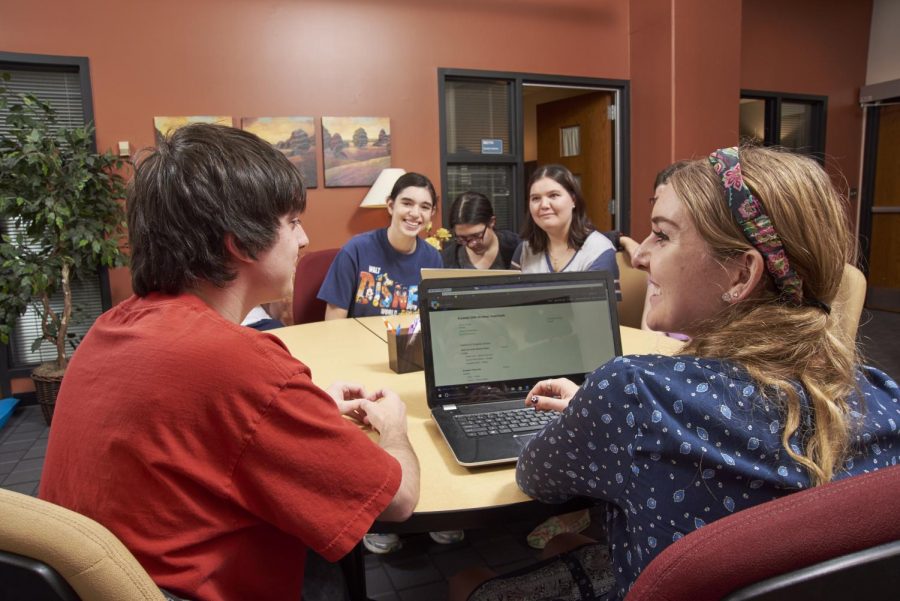 Students of the Elevate Program. (Image via ACC.com)

According to Charity Aymami, an Elevate Academic Support Professional at Arapahoe Community College, before a student of hers was diagnosed with a learning disability, a former teacher of his told him he would never make it to college. After his diagnosis, he was starting to think that the dis-encouraging teacher was right due to the lack of higher-education support for students with intellectual or developmental disabilities (IDD) at the time. That all changed just four years ago when Colorado Governor John Hickenlooper signed Senate Bill 16-196 into law- giving people with IDD an opportunity to pursue higher education. Aymami’s former student proved the teacher wrong. He was going to college.

For 140 years, until May of 2016, the state of Colorado was one of just a few in the nation that did not provide higher-education opportunities towards aspiring college students with IDD. The Elevate program based on ACC main campus in Littleton, Colo. was established to change just that.

Elevate is a new inclusive higher education pilot program at ACC that guides those students towards academic success. ACC is the only community college in Colorado that offers a program of its kind. Jennifer Woegens, an Elevate Coordinator, says, “A lot of times these are students with cognitive delays and so they just won’t be able to hit that test score that they would need to to get into a university. Since we at the community college level are open enrollment and open access, anyone can come here and take classes.” Only three colleges in Colorado take part in the Inclusive Initiative: ACC, University of Colorado Colorado Springs (UCCS) and the University of Northern Colorado (UNC).

Woegens is one of many that strongly believe the higher-education system for IDD students was in need of readjustment. “IDD students that were in these segregated special ed classrooms would go through high school and then they would do transitions for a couple of years and there weren’t opportunities for any kind of education beyond high school. We have lots of students in this underserved population that just wouldn’t get enough support to be able to be successful.” States Woegens. “We’re really providing this opportunity for students to go to college so that they can get jobs that are in line with their aspirations and have more of a purposeful, meaningful career. Something that they would really enjoy doing.”

The program also teaches training for on-campus navigation, social skills, student peered-mentoring, internship opportunities and individual living assistance, so that Elevate students can independently experience college and live competently without guidance. Not only does the program teach skills such as job shadows and informational interviews to help IDD students get a job or career in the Elevate-exclusive course: Personal Development, but how to also be efficient at it when they do. Their main prevalence comes from providing additional support above and beyond what the college [ACC] would offer most IDD students to help students reach their goals and be a productive individual with the right vocational skills.

Most Elevate students are part-time, but that doesn’t mean they don’t have the option to transition into a full-time commitment. A handful of them have taken on leadership roles to ACC’s Student Government Association (SGA), on-campus employment or participating in the student-ran Elevate Club that is purposed on educating our campus community on inclusion and disabilities.

Danielle Batten, an Elevate Support Specialist, suggests that the main outcome of the program is to make students with IDD more employable. Batten has spent many hours engaging with these students and has been enjoying every bit of it. Holding every student to a high standard.

“This job has allowed me to pursue that passion, taking that teaching piece out of it. Through this job I learned that all I cared about was working with this population. I didn’t have to be a teacher. I didn’t have to do anything specific. I just needed to work with this under-served population,” expresses Batten.

“Sure, well just like not the traditional elementary teaching requirements that kind of thing. But I get to work more one on one with students and directly with them. It’s so much fun to work with them and instructors on how to make the curriculum for students who are on modification successful for them,” says Batten.

Students of Elevate are enrolled in fully inclusive academic classes like any other student. Elevate takes pride in having its students being able to attend and learn in these public classrooms. With 28 instructors this semester running a class with an Elevate student. “We want them to have the same college experience as anybody else.” States Batten. “Everyone deserves the right to the same education.”

Last January, Elevate was able to seek approval as a Comprehensive Transition Program. According to Woegens. The approval is a federal designation that grants students with IDD to receive financial aid just like any other eligible student at ACC.

No accomplishment is earned without a challenge, something Elevate knew all too well during the start of the program in 2016. After the program was approved in May 2016, they had only a few weeks to prepare before the first wave of Elevate students arriving in late July. “So really with timing like, yes this could have been done in a different way. And it just wasn’t,” Woegens states. “We were changing the culture of an institution.” After receiving some negative feedback on the unexpected impact to the learning environment from a few instructors and students at the start, Elevate stepped into high-gear. “We don’t want to overburden instructors and so we’ve really made some huge strides over the last several years to do that a lot better. We have much better buy-in from faculty than we had in the beginning.” Instructors can go receive additional training through the school’s Professional Development Center.

To correct these faults, Elevate has been steadily implementing improvements as the program grows. Starting with collaborating with every instructor before the start of the semester to prepare proper modifications for incoming Elevate students. Today, program-exclusive staff members and, or peer mentors are paired with Elevate students in the classroom when needed. Weekly check-ins with the students are now also catered. “It’s so much fun for me, just as these students continue to learn and grow. I think that’s the biggest thing we come to experience at the end of the semester, seeing how much we have grown over here,” says Batten.

“We’re just part of their support team. But they should have a voice in what they want to do and what their goals are because really it’s their education,” states Woegens

According to NPR, about 82 percent of the United State’s IDD educators claim that there is indeed a lack of professors and instructors to meet the needs of students with these disabilities, with 11 percent of our nation’s current Special Needs Teachers not meeting the proper requirements.

Woegens states that students of Elevate can obtain a Comprehensive Higher Education Certificate upon completion or can even earn an associate’s degree by following proper modifications.

But Elevate didn’t just appear out of thin air. With support from both political parties and the Colorado Initiative for Higher Education, a nonprofit group, the Senate Bill 16-196 was passed around four years ago to provide state legislative funding of $75,000 annually to three Colorado college inclusive programs, one being ACC. The majority of the funding goes towards paying the qualified employee’s salaries.

As of next semester, Elevate will have a record-high 26 students. In the spring of 2020, four students will walk across the stage to be handed their certificate or degree, officially becoming the program’s first graduates.

Elevate hopes in the future that they’ll inspire other college institutions around the state to implement inclusive learning so that other IDD students around Colorado have an opportunity to pursue higher education like the rest of us. “Its been quite the journey,” Aymami says with a smile.

“You can never limit anyone.” Batten thoughtfully expresses. “Everyone has the ability to grow and learn.”