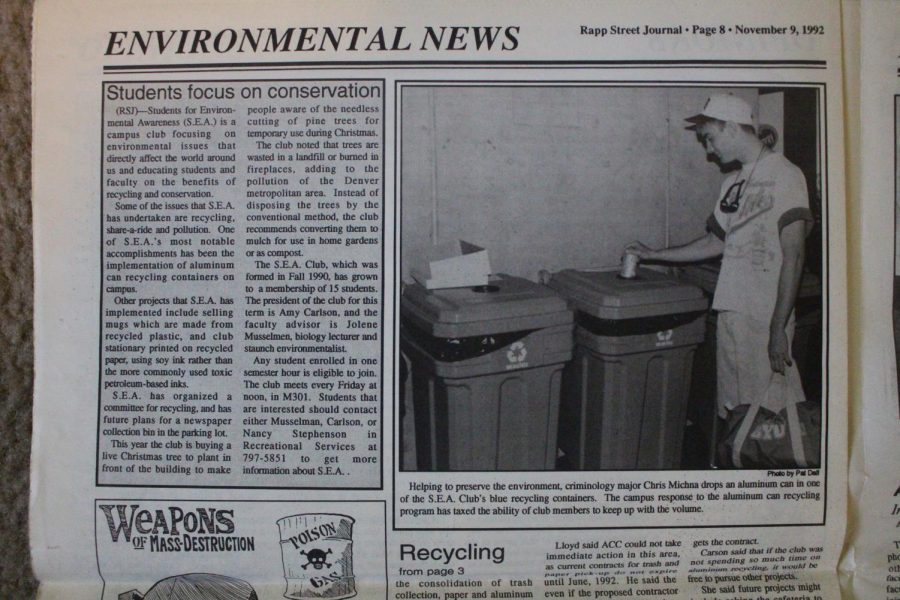 An issue of the Rapp Street Journal depicts criminology major, Chris Michna, using aluminum can receptacle in November of 1992. Photo taken by Kalyca McGuire on Nov. 13, 2019.

In November of 1992, the Rapp Street Journal published an article on the state of recycling at Arapahoe Community College. Back then, the recycling was handled by a club at ACC, known as Students for Environmental Awareness (S.E.A). The 15 student club implemented the use of 16 recycling bins for aluminum cans. According to the article, the “program was so successful that the club did not have the manpower to maintain the 16 blue receptacles.”

The club members of the S.E.A. proposed to the Vice President of Administrative Services that the college take over responsibility for the collection and recycling of the blue receptacles. In the same proposal, club members suggested that 50% of the profits from aluminum recycling be given to the club. Money earned by the club was used in other environmental projects. In the article, the club adviser Jolene Musselman said that the year beforehand “the club used recycling profits to purchase 10 acres of rain-forest.”

While the VP of Administrative Services was unable to take immediate action, the club was able to work on other projects such as “asking the cafeteria to buy glass plates instead of using so much Styrofoam.” The club also planned to plant a Christmas tree on campus to raise awareness for “the needless cutting on pine trees for temporary use during Christmas.”