CC, DD and What They Mean 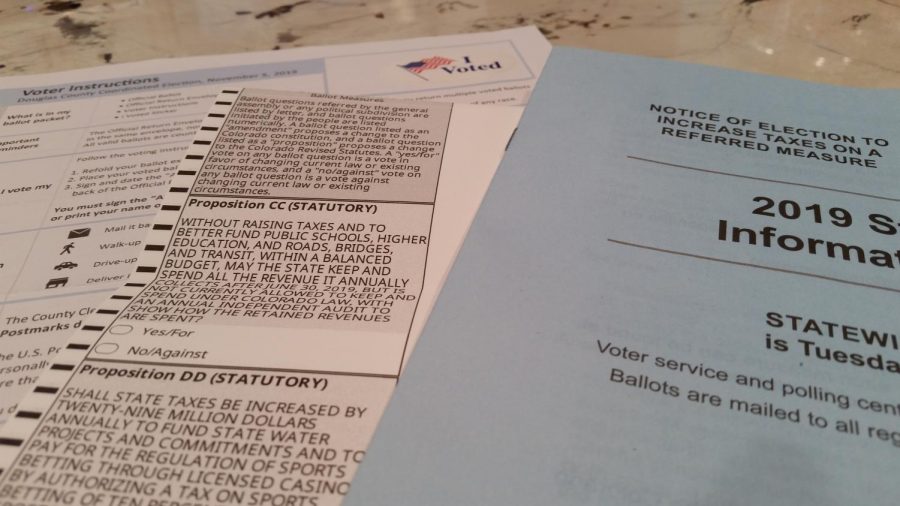 It’s time to cast your votes again in the state of Colorado. This time the focus is on school district boards as well as two new propositions state-wide. Propositions CC and DD are ready to hear your voices, but haven’t made themselves entirely clear for you. Thanks to political jargon and careful, deliberate, and often confusing wording, both propositions can be made to sound more or less promising than they really are.

Without raising taxes and to better fund public schools, higher education, and roads, bridges, and transit, within a balanced budget, may the state keep and spend all the revenue it annually collects after June 30, 2019, but is not currently allowed to keep and spend under Colorado law, with an annual independent audit to show how the retained revenues are spent?

The short of this proposition is that it seeks to retain the revenue that Colorado is currently required to refund to citizens under the Taxpayer’s Bill of Rights (TABOR). All of it would go towards funding the services stated within the proposition.

Due to the wording of this proposition, it can sound confusing how there will be increased funding across the state if taxes are not increased.

The key to CC is that it seeks to increase how much tax revenue Colorado can retain. The funding that these services receive is already capped under Colorado’s TABOR. The Colorado Legislative Council Staff estimated that an extra $310 million would be retained in 2019-20, and $340 million in 2020-21 if it passes, while only refunding taxpayers $26-$90 each year if it does not.

Taxpayers who may be concerned about how the money is spent, how much, and where, can rest a bit easier. Proposition CC also includes the requirement for a private auditor to be hired who will theoretically publish a public spending report for all retained revenue.

The office of Governor Jared Polis, who supports this proposition, released a statement about CC. “This common-sense policy doesn’t alter the right of citizens to vote on taxes, but allows Colorado to keep pace with a growing economy.”

Jesse Mallory, State Director for Americans for Prosperity of Colorado, on the other hand, believes that “…taxpayers will lose their TABOR refunds and government spending will increase. One legislature cannot bind future legislators to spend the money a specific way, so once the money comes in, they can spend it any way they like.”

A ‘YES’ vote on CC will permit Colorado to retain extra revenue from taxes to spend on improving schools, roads, bridges, and transit without having to increase taxes, as well as authorizing a private auditor to publish how that revenue is spent. A vote ‘NO’ will not allow the state to retain that revenue, instead refunding it to taxpayers as per current TABOR laws.

Shall state taxes be increased by twenty-nine million dollars annually to fund state water projects and commitments and to pay for the regulation of sports betting through licensed casinos by authorizing a tax on sports betting of ten percent of net sports betting proceeds, and to impose the tax on persons licensed to conduct sports betting?

Colorado is one of over 30 states that could legalize sports betting by the end of next year thanks to proposition DD. The days of Draft Kings- an online sports gambling site- advertisements could return, as this form of gambling would be regulated by state governments. Proposition DD would not only legalize and regulate sports betting, but would use the money to fund water projects in the state as well as gambling addiction services.

Thirteen states have already legalized and are regulating sports betting, all as of 2018 when New Jersey sought to legalize sports betting and the Professional and Amateur Sports Protection Act was nullified by the Supreme Court in favor of the individual states. Previously, only Nevada had the legal right to this form of betting.

In September of this year New Jersey posted a massive $445 million in sports betting transactions, bringing the state nearly $38 million in revenue. On delays for New York to implement their procedures Senator Joseph Abbaddo Jr. said, “We’re missing out on a huge chunk of revenue which could be benefiting our students and citizens.”

The implications for Colorado are very much the same as with New York. Overall, it seems there is very little drawback to the proposition besides the potential for an increase in gambling addiction. Alec Garnett (D-2), a sponsor of the bill, says, “This new funding will go toward protecting our precious water and we believe this is something everyone can support. I also hope this measure will help stamp out black market sports betting…”

There is overwhelming support for this proposition by elected officials as well as environmental agencies in the state. Yes on Proposition DD states there will be a $29 million tax implemented just on the sports-betting in casinos, bringing increased revenue to the state at no increase in taxes to taxpayers.

However, it cannot be overlooked that the proposition has no cap on the amount that can be gambled. The danger is ever-present that addicts who do not seek help or recognize that they have an addiction will drive themselves into bankruptcy.

Election day in Colorado is November 5th, 2019. Ballots can be mailed in or dropped off at several locations. Check your county map for the nearest location to you, and get your voice heard.