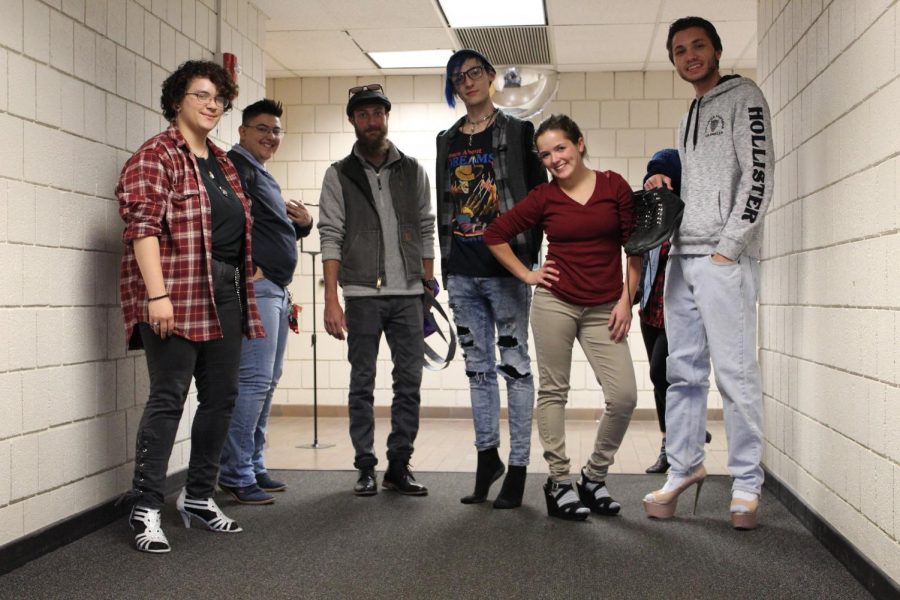 October may be a fun month for people across the United States, many of whom are looking forward to the treat-giving, spook-fest that is Halloween. But for others, this month has a more personal touch.

October is also National Domestic Violence Awareness month, which seeks to bring attention to the physical and emotional traumas that people face at home.

To help bring attention to the issue, students at Arapahoe Community College marched through the halls to raise awareness and to put themselves in the mindset of those affected by sexual harassment or violence.

Donning high heels, students- mostly men- walked across several floors and into the annex building. For many, it was their first time in heels and the difficulties they had with walking were, at first, apparent.

The initial sentiment was one of amusement, as struggling to find their walk again was riddled with stumbles as their senses of balance were thrown off. However, it eventually became apparent that there was an empowering sensation to being in high heels.

The extra height was certainly a boon, though the men who were already over six feet in height stood out even more.

That was the entire purpose, to draw unwanted attention to themselves. Though this event was performed with jovial spirits, it was not too hard to extrapolate from there to understand where the line was truly drawn.

At some point, everyone has undoubtedly been the subject of a joke gone too far. Or, perhaps made a joke that went too far.

When it comes to sexual harassment, the line is even thinner. Men, especially, need to be mindful of their words. Having good intentions is no excuse when it comes to unwanted and unwarranted behaviors.

This event was carried out with the purpose of understanding what it feels like when you find yourself the center of unwanted attention and comments.

Participating in National Domestic Violence Awareness month is something that ACC has been doing for many years. It began shortly after the concept was first introduced in 1981, and has only been expanded upon to include the issues brought forth in the Violence Against Women act in 1994.

This year, however, was the first that students wore high heels to put themselves in the mindset of a woman.

In the state of Colorado in 2014, according to data by The National Coalition Against Domestic Violence, 32.7 percent of Colorado women and 28.6 percent of Colorado men experienced some form of physical or sexual abuse or stalking. Twenty-five people were killed by a current or former partner, with the vast majority of them being killed by gun violence.

On average, one in four women and one in seven men will experience some form of domestic abuse at some point in their lives. Reports are made nationwide almost every twenty minutes.

If you or someone you know requires assistance, call the National Domestic Violence Hotline at 1−800−799−7233.