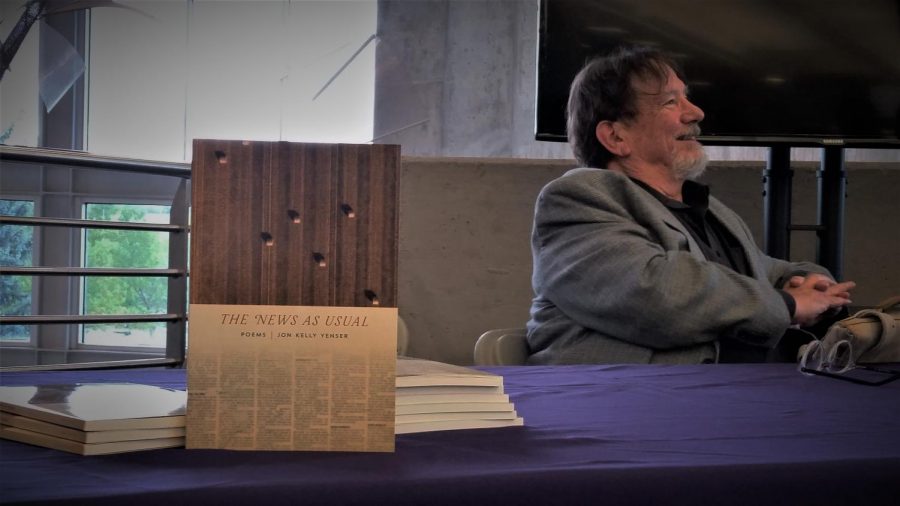 Jon Kelly Yenser with his book, "The News As Usual," answering questions after his reading.

“Poems are not always meant to be understood,” Andrea Mason quoted before introducing the day’s featured speaker. Jon Kelly Yenser, a poet, was at Arapahoe Community College on October 9 to read a few brief poems from his new book, “The News As Usual,” published by the University of New Mexico Press. He’d been invited to give a reading by the ACC Writer’s Studio, and he and his wife, Pamela, also a poet, were there to read poetry followed by a workshop for those attending.

As he stood, preparing to read, the atmosphere in the library was exciting, giving him a warm welcome. Before he began he gave a few words about his life and his experiences in the past with Colorado. To him, it had always been a place of vacation to get away from Kansas. It was a retreat from the daily routine of life, and he reflected kindly on his time in this state.

That is how he began his reading, by putting the audience in his shoes. Reminding them that, to him, Colorado is not home – Kansas is. So when his words from his first poem filled the ears of his listeners about Kansas, the humor landed and the countryside was painted with beautiful imagery. Not of the monotonous, uninspired fields that are all too often likened to Kansas. No, Kelly’s words painted a clear image of rolling hills and beautiful landscapes dotted with nostalgia and comfort. Sure, there were fields aplenty in his writing, but he drew attention to the differences between soccer fields and alfalfa, among others. Just don’t visit Kansas in August, he advised.

As he continued, he shared poems that were personal or from the perspective of someone whom he had never met. The audience ventured with him on a journey across memory. He talked about home, either Kansas or Idaho. He shared his experiences and the changes that life had brought about. The experiences, both good and bad, were written out as thoughtful reflections that perhaps reminded those gathered of their own experiences.

As Kelly talked about how he used to imbibe in cocktails with his friend, Walter, it created an air of melancholy. Walter had recently fallen, and with that had come changes, and the unfortunate loss of things once too routine to be treasured at the time. Everyone has lost a friend, even if it’s just through moving to a new city or state, making that sense of departure was easy to find. He then shared a poem about Fred, his dog who had to be put down. But there was a fondness in those words that made a heartbreaking yet lighthearted poem, dotted with humor as Kelly looked at the old dog with love and adoration.

Some of Kelly’s poems were direct. He talked about dreams and his interpretation, or the morning after eating street food in Guatemala despite being advised not to. He chuckled about his time at Los Angeles International Airport, a busy and frustrating airport. “I think if writers listened more they’d find more poems,” Kelly said before reading a poem he wrote based on the overhead announcement that played in the airport. Though he found himself surrounded by chaos and a sense of submission to the greater workings of the airport, he was able to discern poetry from an alarmist’s warning.

“Poems are not always meant to be understood,” was the day’s lesson. There is truth in those words, for poems that reflect directly on personal experiences may carry less weight to the reader or listener than those about abstract concepts. But that does not imply meaning cannot be derived from the words therein. Poetry is the universal love language in the world of literature, giving shape to ideas otherwise impossible to grasp. It manipulates emotion by simply existing on a page, capable of inspiring empathy in experiences never experienced.
“I think if writers listened more they’d find more poems,” were Kelly’s words of wisdom, too. And there in the ACC library, as Kelly’s poems filled the ears of his audience, for those several minutes there was an exploration into the world and life of someone else. That, in and of itself, is poetry.