An Inside Look at Sturm Collaboration Campus 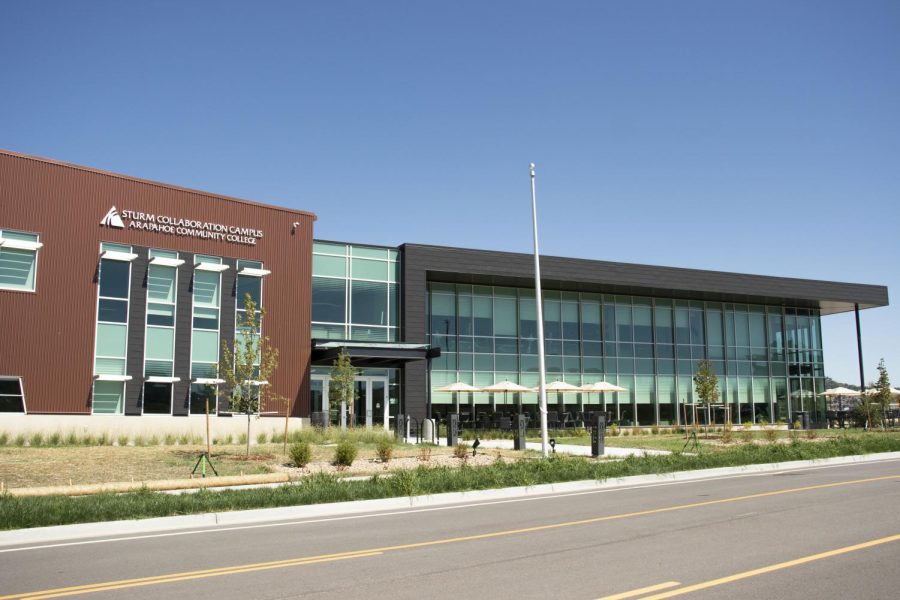 On Sept. 10, I had the opportunity to visit ACC-Castle Rock, also known as the Sturm Collaboration Campus, to meet with the Campus Manager, Peggy Quinn.

Even as a student at ACC in Littleton, I was thoroughly impressed by the campus. Every classroom is outfitted with state-of-the-art technology, from podiums with computer screens built into them, to five of the many classrooms outfitted with the MashMe video conference system, which allows students and collaborators from all over the world to seamlessly communicate as if they were in the same room.

Though, the most notable addition, the anatomage table, allowing nursing students to dissect every part of a human body from a detailed virtual display.

The campus is still new, having only just opened for its first semester. As such, some things are still being finished, including the brand new 3D printing store and the student favorite – the coffee shop! Hang in there ACC Castle Rock students, at least it’s not finals week.

When the tour had concluded, Peggy Quinn and I sat down for a brief conversation, talking about her experiences as well as a more in-depth look at the campus.

How long have you been in this business?

“I’ve been in education since 1981. I spent 24 years at the University of Nebraska in a variety of positions. And then I moved to Colorado and worked at Colorado College in Colorado Springs for three years and I was an instructional technologist. So I was helping faculty create activities and that type of thing for their students. And then I came to ACC in 2009, opened the first campus here in Castle Rock in 2011, and moved over here when we opened this one.”

So what drew you to ACC?

Sounds like you knew you wanted to go with education from pretty early on.

“Yeah, I originally – sidenote, when I was in high school got a scholarship to go to a small, I was from Nebraska, to go to a small college in Nebraska to be an English teacher. And I some point I decided I didn’t want to go to school right away so I joined the Air Force. But, as soon as I got out of the Air Force I knew I wanted to get back into education.”

So what led you away from teaching more into administration?

“It was kind of a fluke. I wasn’t teaching full time. Even then, I was working on my Master’s degree, when I started teaching at the university. I taught at the university for a while. I ran a computer lab to teach people who wanted to be a school teacher how to use technology in the classroom. And at the same time I started that position they started a brand new Master’s program in instructional technology. So, it just kind of led into that. So, I knew I didn’t want to be a full-time teacher, but I knew I wanted to be in education and I knew I wanted to teach, so I still teach now. I teach a computers class here at ACC.”

For the unfamiliar, what exactly makes this a ‘collaboration’ campus? I understand that there’s an outreach in the community, as well as the CSU presence and the Douglas County School District.

“All of those make it a collaboration campus. But the main focus is just starting in middle school, high school students ready and prepared to go on to a career whether it be a college career or a job. We’re working with Douglas County schools in particular to identify those students and what pathways they want. Do they want to go into education? Do they want to get a job?,” Quinn stated. “Whatever that might be, and then make sure we’re providing them with the classes and the information that they need to do that. This semester we have over 100 concurrent enrollment students […] most of them [are from Douglas County] taking classes on our campus. So they’ve always done concurrent enrollment in the classroom but this a lot of them this semester are on our campus. And then they can just start their pathway, as a junior or whatever, stay in that pathway all the way through and then go on, if they wanted to, to a four-year college.”

So all of your concurrent enrollment students are here on campus for class?

“A lot of them. Not all of them. We’ve got about a hundred and twenty, I think, but there’s a lot more that aren’t doing it. And they do that for a variety of reasons. Most of the ones that are here are taking our pathways, you know, they want to be in the pathways that we have selected and some of them are just doing it because they want to figure out what college is like, and even though it’s not a big four-year college there’s enough classes they can take. And then a lot of them do want to go into CSU, we’ve noticed that there’s quite a few of them that do that,” Quinn claimed. “That also, you know, the idea that they can start here, start taking classes at CSU and maybe stay here in Castle Rock, their parents like that I’m not sure a lot of students do, but it saves them a lot of money to do that. They get a break on tuition from CSU. And then the students that don’t want to go to college were working with ADWorks and workforce training at ACC to help them find internships and that type of thing to get them into jobs earlier than they would if they didn’t have those connections.”

But you don’t offer a CSU degree?

“Not yet, but that could happen as we move forward. That is the ultimate goal. Right now we don’t have anybody ready for a third year, so there aren’t any classes for them to take at this point. So we gotta build the first two years up and then CSU, I think, will come along at that point, when they realize that, okay, they’re ready to go and these people want to stay there. The other benefit is they’re still going to be a CSU student, the class doesn’t have to be here with the technology we have, so we have partnerships with CSU-Pueblo and CSU-Fort Collins that classes could be offered from either one of those. And some of the professors at Pueblo have said, well, one week I would come up and lecture there and beam that class back to Pueblo and one week I’ll be in Pueblo and beam it back. So they’re thinking outside the box which is encouraging.”

Future plans for future installments? You had mentioned on our tour the possibility for a second building?

“Yeah, there’s always been the thought of having a second building all along. When that second building, it will happen, they’ve always said four or five years. Maybe six. We’re almost outgrowing this building, now, and I personally – this is my personal opinion – think that it will happen before then. I think that if we keep doing what we’re doing now and do it right students will keep coming. They seem to be very happy. We’ve had a lot of quirks with technology the first three weeks. It’s all brand new technology. Everything is brand new. The podiums are different from the ones they have in Littleton. They’re electronic with the little computer inside of them, so there’s just lots of little things, you know, where we’re like ‘What the heck is that?’ But I do think that the second building will come along and that if everything goes the way they want it to I think there will be more programs, too.”

Sounds like the campus is off to a very good start, then?

“Amazingly, other than the technology, there’s been a lot of little quirks and part of that was we didn’t really a lot of lead time, I mean, we got done with the building right at time to open. We moved from the old campus a week before classes started. That was four weeks ago, and we’ve come a long way in four weeks. I think that even though it was pretty stressful I think it’s starting to calm down so I think we’re going to be okay.”

Unfortunately, shortly after classes began, ACC-Castle Rock was the location of vandalism. Fortunately, it seemed to mostly go under the radar, being quickly addressed by faculty. Despite this circumstance, Peggy said that staff at ACC-Castle Rock are “keeping it very positive” on campus to make all feel welcome and included. “It was an upsetting situation for us. I was shocked,” she clarified.