Contagion: Viral Misinformation in the Age of the Measles Resurgence 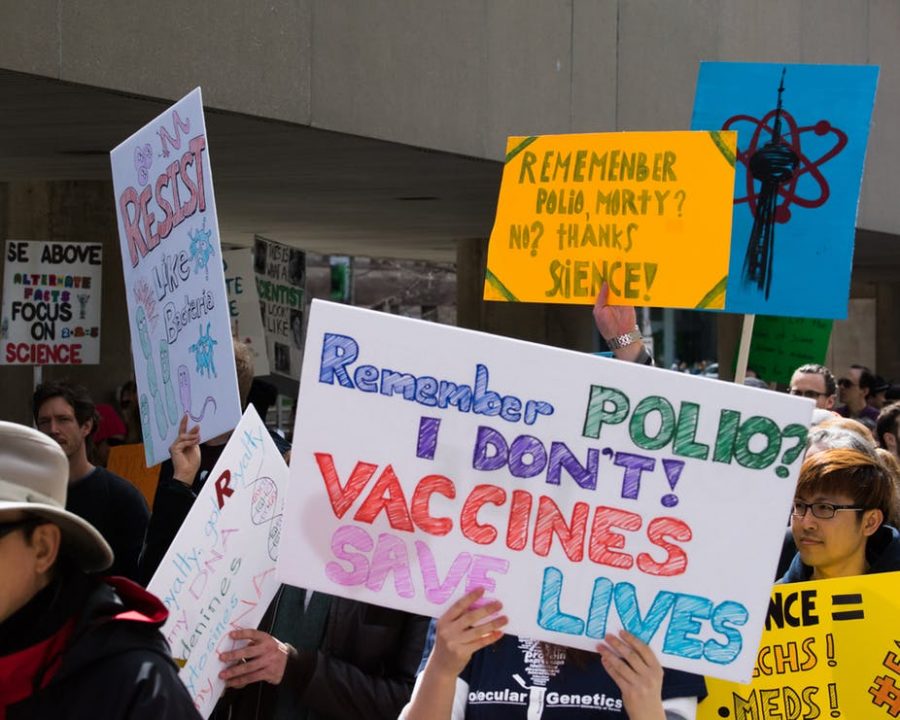 Editor’s note: With the on-going covid-19 pandemic, some may draw parallels to the resurgence of the measles. This piece has been republished for its historical relevancy.

Imagine the panic that communities felt during the 1950’s polio outbreak in America.

Suddenly, clusters of the population were deathly ill, becoming permanently paralyzed and slowly drowning in their own fluids. In hindsight, there were no vaccines available to prevent polio, so vaccine safety was a null topic.

Today, we are able to contemplate the safety of vaccines like the measles, mumps, and rubella (MMR) shot because we are alive due to vaccines. Measles is a highly contagious disease that impairs the immune system and can cause blindness, developmental issues, and even death. It is touching pockets of society in ever-strengthening outbreaks and has an affinity for infecting children, who have the lowest rates of vaccination.

Considered to be eradicated in 2000, the disease has regained a solid grip–yet parents who are more interconnected than ever and reliant on media for information are resisting the measles vaccine for their children at incredible rates.

Figure 1 below shows an image of Walter Blum, an infant who recently contracted measles. Numerous children like Walter are either too young or too sick to receive the vaccine, and for that reason, are regularly the first to contract the dangerous disease. Herd immunity can protect those like Walter and others of all ages with poor immune systems.

When enough people are immunized against an illness, it provides enough protection so that “the germs can’t pass from person to person,” and it becomes much more likely no one will contract the illness.

Disease prevention through immunology, which was once a broadly accepted method because of its timeless success, has reached its nadir under the guise of fearful mistrust in science.

Dot coms like Health Nut News, Mercola, and March Against Monsanto are a few anti-vaccination websites. The individuals who run these websites publish articles such as “Vaccine Safety: Who’s Calling the Shots?” and “Why Herd Immunity is a Hoax.” Another similarity between them? They all market controversial homeopathic supplements, devices, procedures, and books.

Because of the contemporary tailored-to-fit search engine, our system of online social research has created an inequality in our information gathering scope, an increasingly complex social access problem.

Regardless of one’s view on the MMR vaccine, such as a negative view of Big Pharma or religious and/or philosophical exemptions, the reality remains the same: if one is not vaccinating their children simply because of an opinion from the internet, they are likely falling prey to the exact means of deception that they detest.

Because media is expanding, citizens must not accept the initial information they encounter. Content has the potential to not only be groundless but deprioritized or restricted from view as well.

In today’s world, hyperinflated fears can easily translate into morbidity and mortality. Marginalization of the uneducated vulnerable undermines herd immunity and compounds our problems. Making health decisions for a minor is an immense responsibility and unsure stances about vaccine safety can stall disease prevention.

It is easy to mistake one’s fears for knowledge and blame figureheads or existential problems to make oneself feel better, but maintaining level headedness is key.

The nature of web browsing inspires individuals towards group loyalty, leading to fractured, insular availability of true scientific data on the safety and validity of vaccines, which can result in unfortunate consequences of parents undermining the health of innocent children who would otherwise be protected through the vaccine.

For parents to aid the control of the measles outbreaks, they should stay engaged with credible resources to recognize the value of constructing herd immunity. They should realize that, while arguably important, philosophy and/or religion should not be prioritized over livelihood, and they should recognize the serious liability in online social research of vaccine safety.

In Sara Chodosh’s Popular Science article, “Measles is on Track for a Record-Breaking Year; A Regularly-Updated Resource to Keep You Informed,” the science-journalist and writer contends that in this year alone, measles has infected at least 600 Americans, with the highest numbers in areas with low vaccination rates due to personal exemptions.

In addition, Rockland County, New York “has been in an official state of emergency” since 2018, and law enforcement officials are fining unvaccinated citizens to protect public welfare. According to Chodosh, unvaccinated adults and minors in Rockland County were put under a 30-day quarantine for measles just a few months ago.

Figure 2 below depicts a map from Chodoshes article that shows the position of the lowest rates of unvaccinated kindergarten children due to exemptions, and it highlights recent and proximal outbreaks. In April of this year, two Los Angeles colleges contained approximately 800 people under quarantine because of an outbreak. According to Chodosh, over 900 people in Madagascar died of measles since September. During this apex of our country’s measles problem, it is a grave mistake to take the scientific method and miracles of modern medicine for granted.

Some may disagree, but philosophy and religious ideology over herd immunity and biosecurity are unethically set values. A 2016 Boston College Law Review article asserts that religious exemption could soon be limited to increase vaccination rates, and philosophical exemptions, such as those permitted in states like Colorado, may soon be outlawed.

Indeed, the philosophical and/or religious exemption cases like those represented in Figure 2 should be monitored and possibly outlawed to increase public safety. Increased personal accountability and the formulation of an unselfish philosophy are some of the greatest gifts that can be remitted to our children.

Eli Pariser, the author of The Filter Bubble: What the Internet is Hiding From You declares that a “passing of the torch” is occurring, one that is moving towards an automated internet version of broadcasting, and he emphasizes that transparency is needed to make the internet a safe place for people to gather again in the future. According to him, search results vary from person to person due to algorithms, just as in a Netflix account queue.

As stated by Pariser, algorithms fabricate a “filter bubble,” an environment that is “keyed to relevance.” All the freedoms to find reasons to support any belief are always available to everyone due to filter bubbles. During this time of transition, we are enduring public mistrust in healthcare and media outlets amidst budding confusion.

When the convenience of seemingly innocuous information is coupled with the cultural norm of online extremism, including group loyalists and uneducated gurus, there are major drawbacks to the culture of the internet.

Questioning of vaccine safety in increasingly insular online social spheres often presents the user with a consensus favoring the Anti-Vax rhetoric, an online extremist view encapsulating a variety of fallacies. Capricious cultural elements skew the availability of true scientific research in their quest to make safe decisions. A frenzy envelops those who were previously just scared, yet now are frantically opposed.

Parental decisions about whether to vaccinate are subsequently affected by other cultural elements, including education, emotions, and relative spheres of moral concern. Take, for instance, a parent who has arrived at a fever pitch of enthusiasm to rectify their child’s dire health condition.

Although there is little scientific proof that the measles vaccination injures patients, misinformation is perpetuated into naysaying mantras that echo the fight against Big Pharma in online circles. The World Health Organization (WHO) points out other popular misperceptions about vaccines, such as beliefs that the communicable diseases which are regularly vaccinated against have been eradicated. But measles can silently exist in people, silently lurking to surprise its next carrier.

The WHO also explains that compound vaccines like MMR carry “no greater risk for adverse side effects” than singular ones, which refutes common rhetoric that states they can overload the immune system. Credible sources like World Health highlight the prevalence of fallacies that are present in online vaccine data, including incidences of immune defense reactions being mistaken for and reported as casualties.

Modern communities can overlook any outside influences, good or bad, with ease while pursuing researching online. Taking this into account, the current infrastructure exists to deter confusion, to prevent fear and sickness, and to curb chaos, but probably not to harm.

After receiving formal education in biology, I became skeptical of my own vaccine safety research results during a recent health crisis because of a polarizing distrust, yet I still became a fence-sitter about vaccines and Big Pharma as a result. My stress and excitation caused a gradual awareness in the bigger picture.

Before I started taking classes last summer, I was pregnant with my first child, and I had been researching the safety of standard vaccine schedules for infants. And when a measles case popped up in Denver this year, I requested that my pediatrician to allow me to vaccinate my baby early. However, she required me to wait, citing national age standards set by the Centers for Disease Control.

Consequently, the baby and I hid out at home and sacrificed our social lives for a month, until he could safely receive the vaccination. The act of keeping myself and my innocent child in my home, away from a virus, was terrifying. Would it ever be safe to come out?

In the mid 1950’s, my grandfather likely died of complications from polio because he did not have access to life-saving inoculation, but if he had had the chance, I would like to think that nothing would have stopped him from obtaining it. As parents and citizens of a free nation, the most noble fight which we can partake is the fight for public welfare. Consequently, I implore fence-sitters to stop pointing fingers at organizations such as the CDC, public health associations, and pediatricians who dedicate their time to public health efforts.

Instead, one should recognize the bearing of one’s reaction to unsubstantiated data on vaccines. After all, a values structure formulated to prioritize the use of legitimate scientific data does not sacrifice safety. We need to participate in building the arc for our survival as a species because a groundswell is coming.