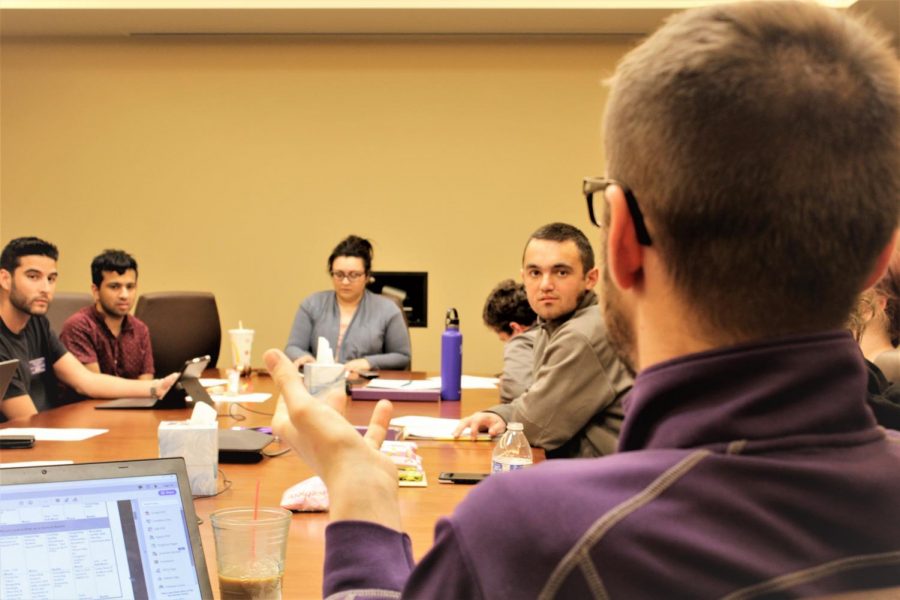 Adviser Dan Balski addressing the student government on how to increase recruitment for next semesters staff, on Mar. 26, 2019

If you don’t know about room 1950 in the main building then you’re missing out on an important aspect of Arapahoe Community College. It’s a board room that looks too official for a humble community college such as this. But behind those closed doors is where decisions are made that greatly effect students; decisions made by a group known as the Student Government Association (SGA).

SGA meets every Tuesday, and is open to the student body to discuss a multitude of topics relating to the benefit of the student experience. This particular meeting began with the President of the SGA, Hina Hawkes, bringing order to the enthusiastic cohort that makes up the student-run government.Image via Dylan Boxer
The 2018-2019 SGA call to order on Mar. 26, 2019

The first topic brought about was the issue of the Regional Transportation District (RTD) passes and the burden of how expensive they can be for the student body. They hope to make these passes more affordable and are currently working out the details to do so.

Director Dan Balski initiated the discussion on how and when the SGA can partake in team building activities. These activities are  important for the Association–by participating, trust is established and team work is reinforced; all good things for those trying to improve the future of the student experience.

“We work in such a professional environment, I’d just like to know more about you all,” says Ryan Holmes, a State Student Advisory Council Rep.

After deliberation on what they can gain from the team building exercises, Balski reminds everyone that the school year is coming to a close and the members of SGA will be leaving their seats in the coming months.

“You’re vacating your positions. That means you should be leaving more successful then when you started, and you should be getting people who would benefit the Student Government,” says Balski.

SGA members are cycled through every school year. The process involves an application process, along with signatures and in some cases, a vote. The current members debated on how to recruit new leaders into the program. After several minutes of discussing various recruitment tactics, the discussion was then put aside for the next meeting.

The next topic that was addressed involved the computer lab on the first floor of the main building. Recently a wall had gone up, separating the lab into two separate rooms. Because of this new addition, there are far fewer computers in the lab than there were last semester. The new room’s purpose also seems to be widely disliked by several students, and therefore brought to the SGA discussion table.

According to Balski, this new room is there to “provide a space where we can use the technology before putting them in classrooms.” Although this seems suitable for some, it might not be for others.

The SGA also brushed on an ongoing project to make textbooks more affordable for students by getting the library involved. The process would include a rental service of some sort, but details of that project are yet to be finalized.

Lastly, the Student Government touched on the potential of a mascot for ACC. This decision isn’t even in its infancy due to a design having not even been submitted. “Just because we’re talking about it now, doesn’t mean we’ll get one,” Balski explains.

The Student Government is constructive place to get involved in the betterment of the student body. It molds leadership and prepares its member for the real world of decision making on a large scale. “We’re all leaders here,” says President Hawkes as they close this latest meeting of the Student Government Association.