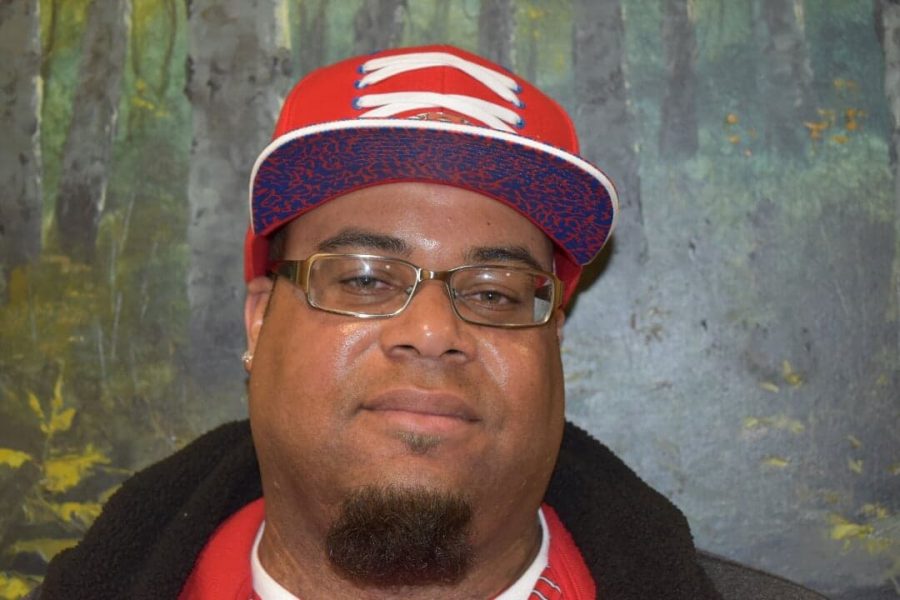 Everett Shockley poses for the camera in ACC's library, Tuesday, March 4, 2019. Shockley spent over ten years at the Department of Corrections prior to attending ACC.

Arapahoe Pinnacle: Where have you been for the last decade or so?

Arapahoe Pinnacle: I know you recently got out, roughly 7 months ago, so what adjustments have been tough since getting out?

Everett: The speed of technology was much different than a decade ago. Smartphones, not everyone has them back then, but now it’s like the only phone you can use. I have an iPhone 7 now, and I know how to call and text, but everyone is talking about these features, and I just don’t have a clue. Technology have been the biggest hurdle getting over. There is also a lack of communication between people. I use to take the bus and talk to people, but now I get on the light-rail (which goes way further now than it did) and no one talks, or even looks at each other which is hard for me because I have always been a people person.

Arapahoe Pinnacle: Has there been anything that you expected to be hard to adjust to that has actually been easier?

Everett: Honestly not really, it’s been a very very tough adjustment, socially, economically, personally. You know, when I went to prison I was the bad guy, and it’s been a tough adjustment for my family specifically to see me how I am now that I am out. I have nieces and nephews that were babies some not even born yet that are now pre-teen and teenagers and they do not know who I am. They just know the stories about who I was before I went in which does not make me out to be a good person. The lack of trust in my personal family is hard to fathom to deal with and is honestly heartbreaking, but at the same time it is deserve because I was not a good person. Asking for help is a lot harder these days, not because I am unwilling, but other people are unwilling. The response I usually get now is just google it which drives me crazy. I never trusted technology, and I always thought that people brought something to the table that cannot be duplicated. To have contact with people, like if I ask for directions people ask, “oh don’t you have google maps?” and I don’t! I don’t know how to use it and it’s really frustrating.

Arapahoe Pinnacle: You’ve been out for about 7 months; with enrolling here at ACC, or trying to find a job, have you run into any issues or restrictions because of your past?

Everett: Of course there were hoops going into college by itself. The fact that I haven’t been in a formal school in about 20 years is difficult. I had to do my own research, figure out how to get to school and figure out how to get on the computer and register by myself. ACC has been very helpful, yes, there have been a lot of assumptions when I ask particular questions, but I’ve found that the more open and honest I am about my skill set; they have been great about working with me step by step. Same with jobs interviews, I have found that the more open and honest about where I have been, and where I’m coming from, people are more willing they are to help me.

Arapahoe Pinnacle: Are you a full-time student, or part-time?

Everett: Coming out of prison I did not have a dime to my name, so to receive the full award I needed I had to enroll as a full-time student. When I first got out I did not have that opportunity, as I am currently living in a transitional house, and we had restrictions on where we could go, how often we could be gone, so I actually had to graduate their six-month program before I could enroll here at ACC.

Arapahoe Pinnacle: So what drew you to ACC initially?

Everett: Before I got out I know that I wanted to study mortuary science so I looked around. ACC was the school in Colorado that has a mortuary science program. Since I am on parole I knew I could not leave the state for school, so ACC fit my requirements requirement.

Arapahoe Pinnacle: Last question; what do you like about ACC so far, how are your classes?

Everett: Things are going… Ugh, I’m not really a good judge of how it’s going. I’m not failing! You know I didn’t expect it to be easy, I have a big learning curve with technology, hell I still handwrite everything. I also never really learned how to study in school, so it has been difficult. The classroom experience is honestly what I paid for, and I am very satisfied with it. I like the conversations, and I like the people in my classes. The class size also really works well for me, they’re not too big (less than 20 people) and that allows me to be comfortable and speak up during discussions, and also hear from the other students in my class. I believe we learn from others. And I really love it here.