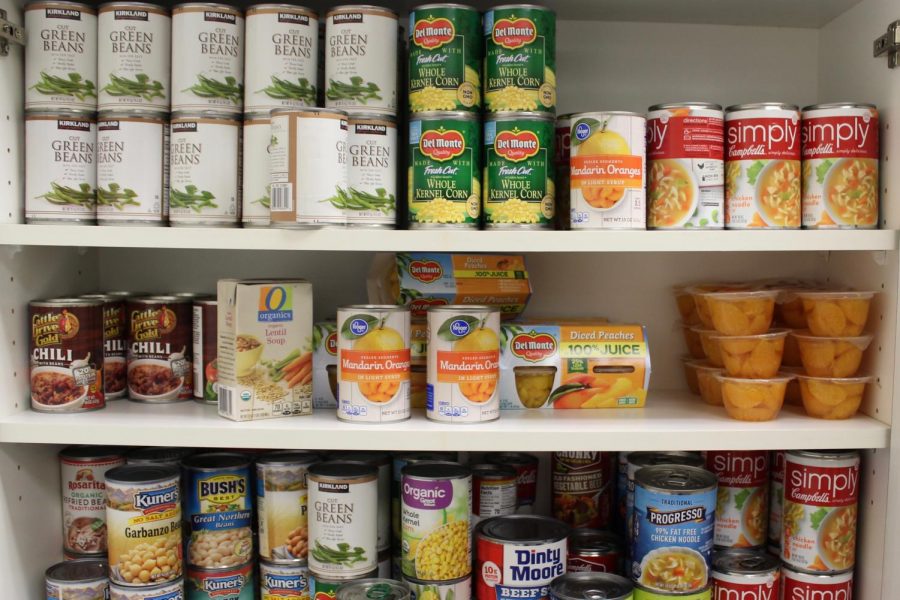 Nonperishable food fills the shelves in the new student food pantry at Arapahoe Community College in Littleton, Colo. on Sept. 11, 2018.

Cans of soup, jars of peanut butter and boxes of noodles are stacked neatly and waiting for students in the new food pantry at Arapahoe Community College.

Since its opening a month ago, 15 students have accessed the pantry, said Tanya Brown. Brown, whose office is located near the pantry in the Student Engagement Center, is the Care Concern and Outreach Coordinator for ACC.

“We didn’t know what to expect,” Brown said. “We weren’t sure what our numbers would be like.”

But the Student Engagement Center suspected there was a need. A few staff members began looking into campus hunger about a year ago. Then during the 2018 spring semester, they conducted a survey about food insecurity at ACC. Nearly 55 percent of the students that participated responded yes or maybe to the question “As a student, has there ever been a time when you did not have enough food for yourself or your household?”
Getting started
The Student Engagement Center reacted by opening ACC’s food pantry on Sept. 10. To get the pantry started, the ACC Foundation gave them money from the student emergency fund to purchase nonperishable food and toiletries. Donations from ACC employees and students have been coming in as well.

In fact, a donation contest has begun between the administrative assembly, the faculty senate, the classified staff, the ACC Foundation board and students. A prize will be awarded in December to the group that donates the most items.

Who’s in the lead?

“Right now it’s administrative assembly,” Brown said with a laugh during the first week of the contest. “But they had a head start. I don’t want to rub it in too much.”
Up and running
Word of the pantry is spreading. Students were notified via emails and the Stall Street Journal. Faculty and staff were also notified through email and can direct students to the pantry if necessary.

“We’re utilizing as many ways as we can to let the students know that this is available,” Brown said.

To use the pantry, students must simply show their student ID and provide the answers to two questions: “What is your S#?” and “Do you want us to follow up with you for additional resources?”

Students can then take whatever toiletry items they’d like and up to seven food items per week.

The food pantry is in the Student Engagement Center, room M2720, in the main building of the Littleton campus. It’s open Mondays and Tuesdays from 1:00 p.m. until 6:00 p.m.
For the students. By the students?
The food pantry was created for ACC students. But Brown would also like it to be run by students.

“We’d rather have it with that focus than have the staff overseeing it,” Brown said. “We’ll support it, but let the students be the ones driving the project.”

With that goal in mind, the Student Engagement Center created a signup that allows students to volunteer to work two-hour shifts in the food pantry.

On the afternoon of Sept. 11, English major Cara Allen was the food pantry volunteer. Her interpersonal communications class requires eight volunteer hours this semester, and she plans to spend them working at the food pantry.

“I’ve worked at food pantries before,” said Allen. “It’s a nice way to connect and help.”


The pantry’s future
Right now, the pantry is relying on donations from ACC employees and students. However, the Student Engagement Center is looking into partnerships with other nonprofit organizations, such as Food Bank of the Rockies and Starbucks. They are also considering acquiring monetary donations, perhaps from someone in the community or through the ACC Foundation.

The Student Engagement Center is gathering data on how often the food pantry is used, what items are taken, how many donations are received and from whom. The data will inform decisions made about the future of the pantry. The food pantry project could expand or contract based on the numbers.

Brown, hopeful it will expand, has already spoken with facilities about adding additional shelving.