Review: “The Killing of a Sacred Deer” 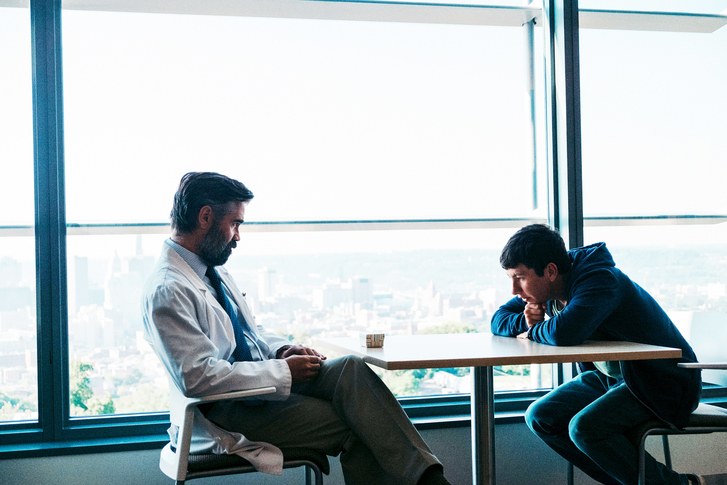 Image via The New Yorker.

I wasn’t incredibly keen on the idea of driving all the way downtown on a Saturday night, but the Mayan Theater was the only place showing the film I had to see. And I had to see it. Sure, my weekend movie choices sadly consisted of “Jigsaw” and “Suburbicon,” but ever since I saw Yorgos Lanthimos’ last work of art I’ve been eager for more.

“The Killing of a Sacred Deer” did not disappoint.

It follows Stephen Murphy (Colin Farrell), a cardiologist who takes part in an interesting relationship with Martin (Barry Keoghan), a troubled young boy. They exchange gifts, and initial scenes leave viewers wondering about the relationship between the two. Later, we meet Stephen’s wife (Nicole Kidman) and children, getting to experience the seemingly perfect lives of a family with the income of two successful doctors. Life goes on – until Stephen’s children start to fall horribly ill.

Why? None of the doctors – Stephen included — can figure it out. The only person with any kind of explanation is Martin, and Stephen doesn’t much care for the atonement of past sins. Soon, friendly becomes ferocious and monotonous becomes malicious.

This writer/director is proving to be a maven of modern film. The dark humor ranged from near horror-style violence to ironic fetishes, and thanks to Lanthimos’ signature, matter-of-fact dialogue, I laughed throughout. But at times the film was completely unsettling. The score set my teeth on edge, amplified by the shots of open-heart surgery and uncomfortable eye-contact. The clean lines and clinical settings – at the hospital and otherwise – make for an unnerving discomfort between laughs. Somehow though, there’s perfect harmony between the witty and the woeful.

But what’s really incredible about “The Killing” is the complex characterization achieved in this hilariously humorless world. There’s plenty of help from the cast – Kidman and Keoghan are a perfect fit for the blunt dialogue — but viewers get to know each character to the point where the lines of morality are blurred. You become deeply attached to the family members and Martin alike, even if it’s in a sadistic sort of way.

“The Killing of a Sacred Deer” was never mainstream. It probably never will be, likely to join the director’s other films on a cult-comedy pedestal. What Lanthimos is doing is worth paying attention to. For most filmmakers, there’s a line between reality and the supernatural, a line that the creative take pleasure in blurring.

But for Lanthimos, that line doesn’t even exist.

Get your tickets while you still can, and check out the trailer below.