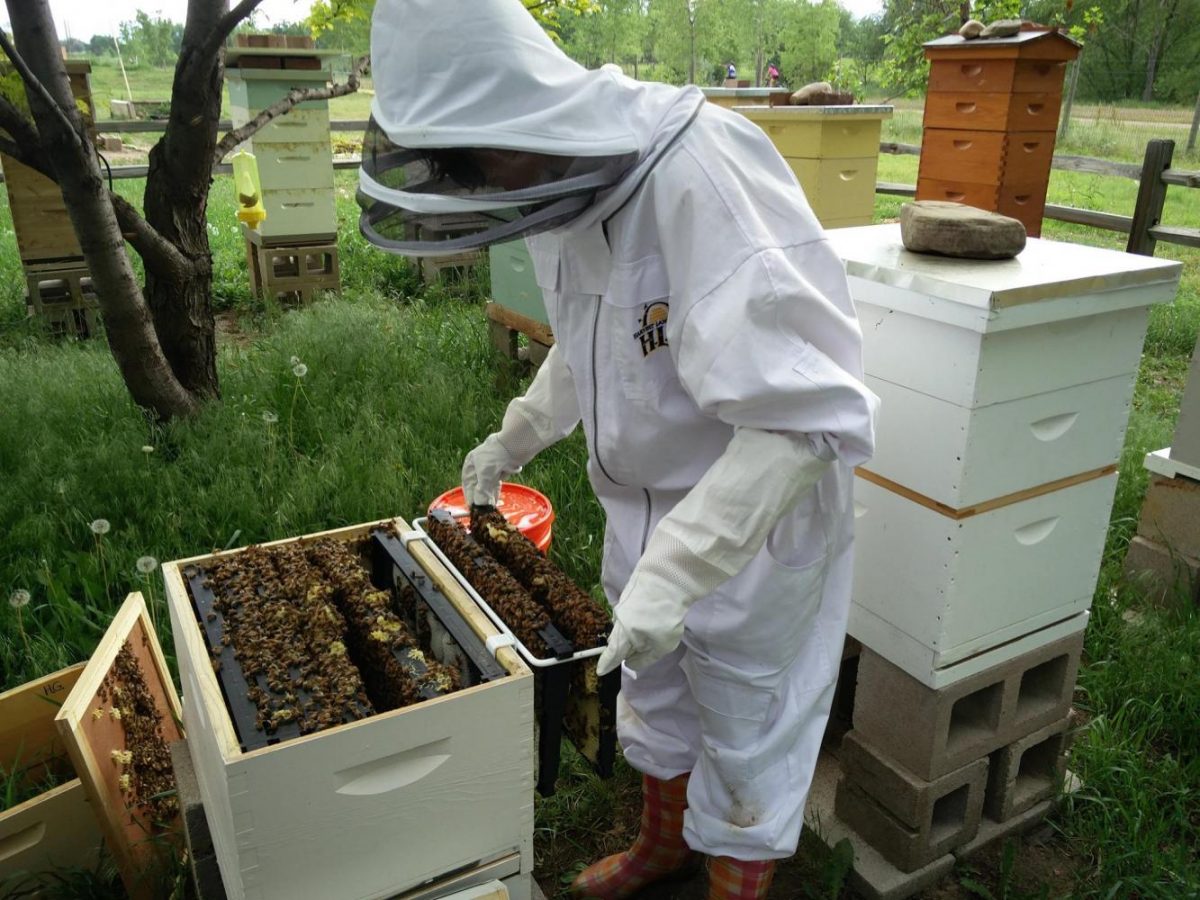 I was lucky enough to be accepted into a beekeeping mentorship via ACC and the Hudson Gardens. As a first-year beekeeper, a lot of information is thrown at you. Here are just a few things I’ve learned since starting my first hive.
1. Beekeepers don’t agree on anything.
The old adage goes something like, “Ask five beekeepers a question, get eight answers.” Whether it’s feeding, inspecting, or maintenance — we don’t agree on any one way to keep a hive. Humans have been interfering with honeybees for thousands of years, yet there isn’t one defined system for beekeeping.

This can be frustrating for the new, high-strung beekeeper (me), particularly when seeking advice. 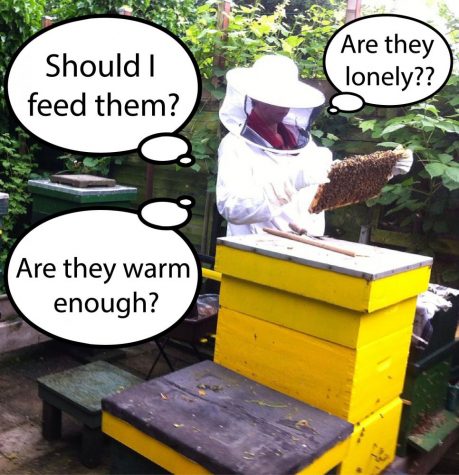 But why though?
No hive is exactly the same. So many variables are involved when it comes to the health of a hive, and it’s challenging to know which factors are to be addressed and prioritized when you make beekeeping decisions. Hives and colonies vary when it comes to environment, breed, weather, season, age, and so on.

Keeping a hive is a bit like child-rearing; what works for one may not work for the other. Beekeepers can sometimes be like the judgmental parents in the playground. 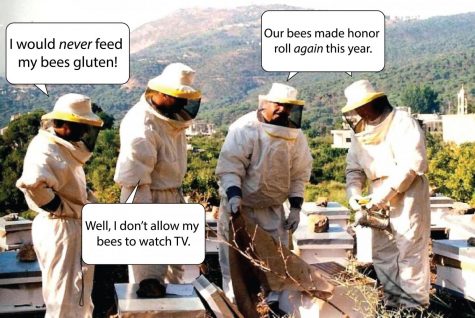 My advice:
Despite contradicting opinions and techniques, keep in touch with a local beekeeping club, or at least an online forum. You’ll quickly find a couple people whose experience and guidance you’ll trust, thus helping you find a valued mentor. Don’t be fearful of making your own decisions based on common sense and research.

Despite our constant disagreements, beekeepers are some of the most generous people when it comes to hands-on help and sharing information.
2. Beekeeping is not that hard.
The idea of keeping a hive, even just one, seemed daunting to me at first. I felt for sure that my inexperience would kill my colony in its first season.

Turns out beekeeping is more of a timing game than a daily chore. Beekeeping requires, “more effort for your cat, but less than your dog.” According to Kim Flottum, editor of Bee Culture Magazine.


But why though?
The best insight I have ever received as a beekeeper is that our hives survive in spite of us, not because of us. Honeybees were doing fine before human intervention.

Aside from checking on them every one or two weeks (depending on the season), they typically don’t need a lot of intervention — they do most of the hard work on their own. The intensity of care depends on the beekeeper’s goals (e.g., commercial honey, pollination, breeding, etc.) but the typical hobbyist keeper does not need to handle them more than once a week. More than that could disrupt their cycles and cause undue stress for the bees.

This is not to sugarcoat the fact that certain bees are on the endangered list, or that Colony Collapse Disorder (the phenomenon where honeybees disappear from the hive) is occurring. There is always the chance that you could lose your colony despite your best efforts.

Fortunately, setting up and establishing your hive is relatively simple. There are even ready-made, inexpensive beehive kits that you can purchase from farm goods stores, local supply shops, or online.

A crowdfunding campaign started the Flow Hive. Its minimally invasive design would allow the beekeeper to extract honey without pulling frames, thus hurting fewer bees. In my experience, beekeepers have had mixed results, and some claim that it doesn’t work in certain states due to varying weather environments. Beekeepers not agreeing again; what a surprise.
My advice:
If you have access to yard space and your local community regulations allow, I highly encourage you to get a hive. Provided you don’t have allergies (less than 1% of the human population is allergic to honeybee stings) bees are essentially a low-maintenance pet.

Keeping a hive is a wonderful way to promote the environment (think of how enlightened you’ll sound at your next dinner party!) and they are endlessly fascinating to learn about.

Mites are not so destructive in that they suck the hemolymph (blood-like fluid) from honeybees; it’s that they transmit multiple strains of viruses to the colony. A moderate amount of infestation can kill your hive within the first year.
But why though?
A former manager at Hudson Gardens and Event Center, Amanda Accamando, once told me, “If you’re going to keep bees, you’re going to keep mites.”

First detected in the US in September 1987, the varroa mites are one of the most prevalent, destructive risks to a hive’s livelihood. Mites are practically an inevitability when you have a hive; it’s how you deal with them that can define you as a beekeeper.
My advice:
This is a complicated issue; these are just the basics.

Some beekeepers chemically treat their hives multiple times a season as a precaution, regardless if mites are there or not. Other beekeepers don’t treat at all, attempting to breed “survivor bees” that are strong enough to withstand mites and diseases on their own.

There are legitimate reasons to both schools of thought.

Treating bees is viewed as responsible because it prevents the risk of spreading mites to other hives. It’s also considered more humane because you’re giving your hive a higher likelihood of surviving the first year.

Not treating your colony is a proposed way to reverse the effects of honeybee inbreeding that has resulted from years of their commercial and livestock use. It is also a preventative from creating a “super mite”, similar to how some illnesses have become antibiotic resistant. As an added bonus, your honey and wax will be uncontaminated by any chemicals from the treatment.

As a first year beekeeper, I made the decision to use chemicals such as oxalic acid (known for being less harsh and more eco-friendly) and to only treat when mites were evident. I suggest that new beekeepers do the same, especially if their hive is close to neighboring apiaries. However, I encourage looking into the developing research of low-treatment, or treatment free beekeeping as you gain experience.

To help you get started, here’s a list of beekeeping communities and classes in Colorado. Students and faculty can also email Jacob Malsch to join the ACC Beekeeping club at [email protected]