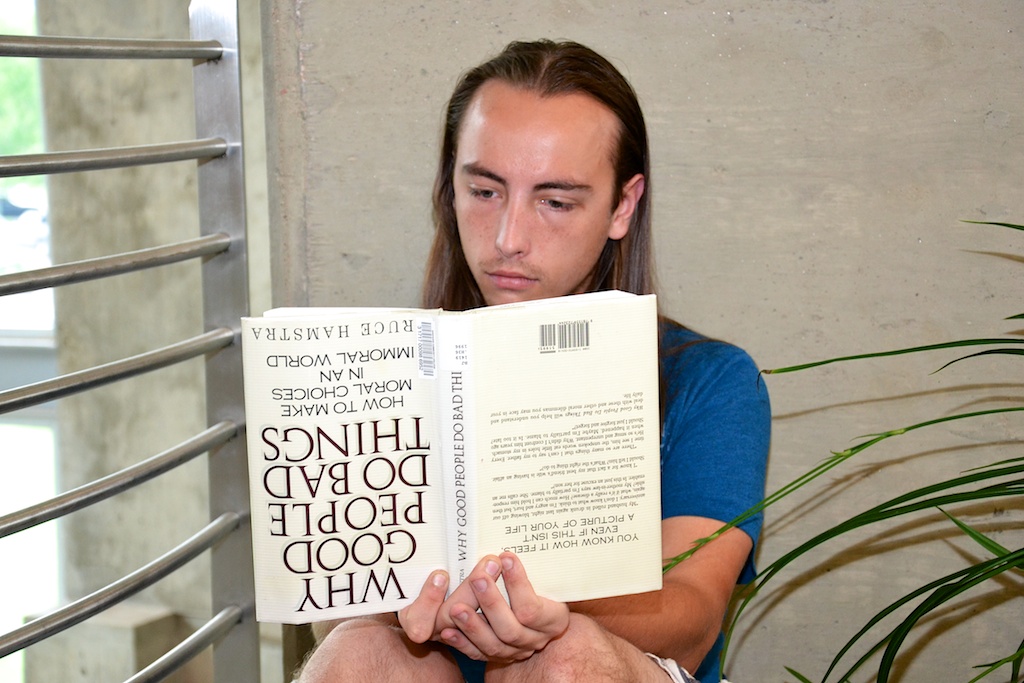 Scott Bright–he sweats diligence and eats commitment for breakfast. He’s the Secretary of Student Government, a psychology major with an emphasis in human sexuality, and an applicant to the President’s Student Advisory Council.

He organizes a Dungeons and Dragons game every Thursday, works 30+ hours a week at a sex-shop, and takes care of his younger brother. He loves Pokémon, comedy, tattoos, marijuana and feminism. He’s the ‘voice of the students’ and a true social justice warrior.

Am I forgetting anything?

Oh yeah, he’s the Editor in Chief of The Arapahoe Pinnacle for the third semester in a row.

That’s an awful lot to balance, but Bright likes to keep busy. Every new term requires an adjustment and a vow to relearn time management. He’s very organized, and a structured schedule helps. His real secret is that he enjoys his work: “Whatever I’m involved in, I get really passionate about.”

As editor, Bright has tended the flame, watching The Pinnacle grow from a small, consensus-style school paper into the multifaceted, issue-tackling publication that it is today. Readership has increased dramatically during his appointment, helped tremendously by his guidance as editor. He continues to push for unique angles and the telling of important stories.

That’s Bright’s favorite thing about The Pinnacle: reporters and editors can write about what they chose as long as it meets the journalistic standards of fairness and accuracy. “I like the freedom,” Bright says. “Our sports writer can write about gender equality… Even though you have your beat, you can literally write whatever you want.”

Bright himself has a variety of work, ranging from his “Ask Scott” advice columns to coverage of ACC events. He’s reported avidly on the LGBTQ+ community and written moving Op-Eds like “An Open Letter to All Men,” tackling social issues on every scale. Like a good journalist, Bright questions everything. He even wrote an editorial critiquing ACC’s response to the travel ban early this year.

However, all good things must come to an end. After a strong and influential run, Bright will step down as Editor-in-Chief at the end of this semester. In Bright’s opinion, as long as the next leader is enthusiastic, there’s a prosperous future in store for this publication. He would like to see it grow even bigger, competing with larger University publications like CSU, but he knows that the first step is improving student readership.

Bright has worked hard for The Pinnacle, going above and beyond what was expected. Beyond his work ethic, what’s truly striking is his humility. When asked what he would like readers to know about him, Bright’s answer was simple: “I want them to know that I care. I care about the school, I care about Colorado, I care about what I report on. I’m always here to listen.”